Don't get drunk in a Texas bar 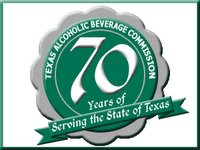 Reuters reports that Texas has begun sending undercover agents into bars to arrest drinkers for being drunk, a spokeswoman for the Texas Alcoholic Beverage Commission said on Wednesday.

The first sting operation was conducted recently in a Dallas suburb where agents infiltrated 36 bars and arrested 30 people for public intoxication, said the commission's Carolyn Beck.

Being in a bar does not exempt one from the state laws against public drunkenness, Beck said.

The goal, she said, was to detain drunks before they leave a bar and go do something dangerous like drive a car.
Posted by brylun at 5:26 PM

Sounds like the budget for law enforcement in Texas is a wee bit too large, as they must have too many police officers with nothing better to do. Wait till Nurse Bloomberg hears about this one.

And you thought all the loonies were in Washington.