While I am sure that all regular readers of Flares' are intimately aware of the components of Multifactor Productivity there is always the possibility that somene may drop by and feel a need for additional information in order to assess its importance.

The BLS released a report on Thursday concerning multifactor productivity, the significance of which seems somehow to have escaped major media. 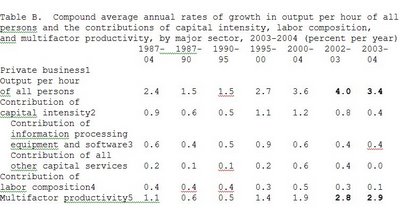 Increases in productivity are the means by which the "pie" grows larger. The fact that the rate of of increase from 2000 through 2004 (as measured in output per hour) was 50% greater than that recorded over the previous twelve years - which included the '90's boom - would seem to be a matter of more than passing interest. The additional fact that multifactor productivity was growing at a rate 33% higher than it did during the hottest years of the '90's boom (95-99) seems even more significant.

All that is missing is the dotcom bubble in the stock market.

When the media does wake up (should that occur) I somehow doubt that the headlines will read "Productivity Increases at Best Pace Ever Set". My bet is that "Fear" and "Unsustainable" will be the predominant words. The components matrix of the increase might lead one to an alternative conclusion.
Posted by Rick Ballard at 10:11 AM

I doubt if the media will talk about productivity, but they will be more than happy to tell you that health care costs have grown at such phenomenal rates they are greatly outpacing the rate of inflation and are in fact the leading cause of bankruptcy in the US. In other words, there is always something to take away from any good news. Count on it. That of course, adds to the over all anxiety of the public.