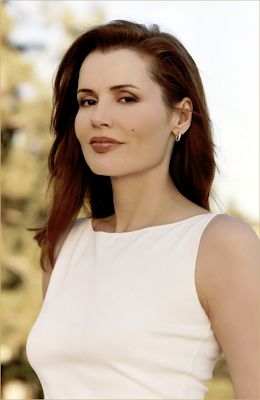 He attributes this downturn to two main causes: the practice of putting armed guards on many merchant ships that transit the area and the increasing efficiency of the various naval forces patrolling the area.

None the less these measures as well as insurance premiums still make transiting off the coast of Somalia very expensive. The only long term solution is controlling the coastal areas the pirates are based out of, but the weak central government of Somalia holds no promise of achieving that for some time.

For the Hot Stratfor Babe I looked to movies featuring female pirates and, after ,y usual exhaustive search, I settled on Geena Davis for her role in Cutthroat Island.

Ms Davis has been a very successful actress during her long career. However, that success does not include her role as the piratette Morgan Adams in the film Cutthroat Island. In fact, it was such a flop that it probably killed her career on the big screen and hurried her transition to television. I speak from experience, if you ever have a chance to watch this movie, do something else instead.

Piracy off the coast of Somalia has dropped off dramatically in 2012. Successful ship hijackings have decreased from 31 in 2011 (and 49 in 2010) to only four so far in 2012. Attacks against ships have also decreased, falling from 199 reported attacks in the first nine months of 2011 to 70 attacks over the same span in 2012 -- a 65 percent drop. However, diminished activity does not necessarily mean a decrease in the cost of sailing around the Horn of Africa. Somali pirates occupy a unique position, which is right along highly strategic global shipping lanes yet outside the reach of any national power. For international actors, it is politically and militarily easier to try to contain the Somali piracy threat than to eliminate it. But containment comes at a high cost.

Many factors have contributed to the decrease in pirate hijackings in 2012. One factor is that shipping companies have begun equipping their ships with more countermeasures, namely armed guards. For several years, commercial ships sailing in the Indian Ocean have used other countermeasures, such as fences, water cannons and adjusted tactics like disabling the ship. But the widespread deployment of armed guards beginning in 2011 (guards had been used sparingly as far back as 2008) has a very close correlation to the recent decrease in hijackings. In late 2009, only about 10-20 percent of commercial ships sailing through waters where Somali pirates operate carried guards; today, some estimates put the percentage as high as 70 percent. To date, pirates have never successfully hijacked a ship that had armed guards. But it should be noted that, even though the use of armed guards appears to be the most effective countermeasure against piracy, there are other factors at work.

For instance, government officials also attribute the drop-off in attacks and hijackings to better coordination between foreign naval patrols, which have made the waters off the Somali coast a less permissive environment for pirate operations. With several years of practice, sailors from international missions such as the U.S.-backed Combined Task Force 151 and the EU-backed Atalanta mission as well as from the unilateral missions of China, Russia, Iran and others have had time to study pirate activity and become more efficient at stopping attacks.

Several dozen foreign naval ships are deployed to secure the waters for commercial shipping at any given time. Their focus is escorting ships through the Gulf of Aden, but the area of pirate activity is much larger than that, reaching across the Arabian Sea to India and Madagascar. Effectively patrolling such a large area requires intelligence and the development of a counterpiracy doctrine that includes going after the larger pirate vessels, called mother ships, that extend pirates' range and allow them to operate in rougher seas during the monsoon.

Taken together, the increased use of armed guards aboard commercial ships and the growing effectiveness of foreign naval patrols have contributed to undermining the pirates' control over the seas. Three years ago pirates were largely uncontested, but now they face a more coordinated defense. They hijacked commercial ships because they were relatively soft targets -- which could be taken by four people with AK-47s, a fishing boat and a ladder -- making the millions of dollars in profit from a ransom payment very attractive. The armed guards and naval patrols have not eliminated piracy, but they have increased the costs of attacking and seizing a commercial ship. Because pirates are motivated more by profit than by any ideology, a decrease in profitability will deter them from engaging in the practice.

Still, whatever the status of the sea, the coastal towns of Somalia, such as Hobyo and Haradheere, are still out of the control of any national or international force. The Puntland Maritime Police Force, which began operations in early 2012 with the help of Arab funding, made some progress in denying pirates sanctuary on land, but political contention prevents it from controlling the territory outright, making pirate activity still a very attractive economic model in central Somalia.

When piracy flared in the Strait of Malacca in the early 2000s, Singapore, Indonesia and Malaysia were able to pursue the pirates on land and deny them sanctuary because they had the security forces and territorial integrity to do so. This is also true currently on the western coast of Africa in the Gulf of Guinea, where pirates occasionally hijack ships even though they have no ports in which to anchor the vessels. Since the West African governments have control -- however tenuous -- over their own sovereign territory, they still have the means to track down hijacked ships and keep pirates from creating sanctuaries. Somalia, on the other hand, has struggled for decades to control its territory. Over the past few years, it hasn't even been able to fully control Mogadishu, its capital, against the Islamist threat from al Shabaab. The new Somali federal government still lacks the capability to control pirate towns such as Hobyo and Haradheere, and its officials do not appear to want a strong Puntland doing it for them.

By wresting maritime control from Somali pirates, commercial shipping companies and foreign navies have reduced the number of attacks but have not eliminated the threat. Several Western forces, including those of France, the United Kingdom and the United States, have gone on land a few times to pursue pirates, but generally, foreign militaries have avoided Somalia. Whereas the countries bordering the Strait of Malacca or Gulf of Guinea are able to go on the offensive to root out piracy, the rest of the world, unable to rely on Somalia, is going on the defensive.

In essence, the commercial shippers and naval forces have adopted a siege strategy -- they hope to starve the pirates of resources, forcing them to give up. Somali pirates held about 20 ships at any given time in 2010; they currently hold 11. As the pirates hijack fewer ships, and as armed guards make piracy more dangerous, the entire enterprise is looking less lucrative and appealing.

Even though the Somali pirates have not been as successful in 2012 as they were in recent years, their existence is still making it more expensive to sail around the Horn of Africa. The problem with the siege strategy is that as soon as shipping companies or foreign naval forces let up on the pirates, they will go back to hijacking ships.

The cost of prevention right now is high. It is impossible to know exactly how many ships are vulnerable to Somali pirate attacks each year, but we know that about 33,000 commercial ships pass through the Gulf of Aden yearly. Estimates of how many of those ships carry armed guards range from 40 to 70 percent. That means that about 13,000-23,000 ships are paying for armed guards to accompany them through the vulnerable areas, a roughly 10-day trip, at a cost of approximately $60,000 each time. Based on those figures, the total annual cost for shipping companies merely to deploy armed guards on their ships through the Gulf of Aden is between about $800 million and $1.4 billion. The total cost of piracy to the world in 2011, according to the One Earth Future Foundation's estimates, was between $6.6 billion and $6.9 billion. This estimate included $160 million for ransom payments; other preventative measures, such as rerouting ships or using more fuel to maintain higher speeds, made up the rest of the costs.

In other words, the cost of preventing piracy off the coast of Somalia is substantially higher than the costs piracy inflicts. Nevertheless, shipping companies are willing to pay a premium to prevent disruptions in their operations. They would prefer to pay a small amount for protection on each trip -- even though it adds up -- if it means averting a hijacking and multimillion-dollar ransom.

The key component of the siege strategy is that it weakens the pirates' control over their land-based sanctuaries. Their power is connected to their revenue, so the decrease in revenue will decrease their power. The shipping companies and foreign navies hope that some other, less disruptive enterprises will eventually take root along Somalia's pirate-heavy coast.

In the midst of forming its first permanent government since 1991, Somalia is currently incapable of addressing its lack of control over the central Somali coast. Instead, it is focusing on securing the population bases of Mogadishu, Kismayo and other small towns in south-central Somalia from al Shabaab. This will occupy the government for at least the next year. Even after that, Mogadishu has little incentive to try to tighten its control over central coastal pirate towns. The government has much more to lose if it fails in southern Somalia because it redirected scarce government resources to take on piracy. The pirate-held areas are economically depressed and are politically less important. That's why they started engaging in piracy in the first place.

The only force that has significantly challenged the pirates on land is the Puntland Maritime Police Force. Located in northeast Somalia, Puntland is much more stable than the south and is virtually independent. The Puntland Maritime Police Force had success in capturing pirates, destroying their staging bases along the beach, cutting off their supply routes and even, supposedly, attempting to seize hijacked vessels from the pirates. However, the police force suffered from funding cuts and political opposition and appears to no longer be active against the pirates. Although Mogadishu is unable to control much of its territory, the new government doesn't want regional governments accumulating too much strength. In the end, a strong Puntland may be more of a risk to Mogadishu than pirates.

Without a sustained, land-based intervention, Somali piracy will continue -- even if it is at a lower rate -- at least until some other criminal enterprise takes its place. But even at its lower rate, as long as Somali pirates are operating, they will be an expensive burden for the world's shipping industry.

The Expensive, Diminishing Threat of Somali Piracy is republished with permission of Stratfor.
Posted by ambisinistral at 7:00 AM