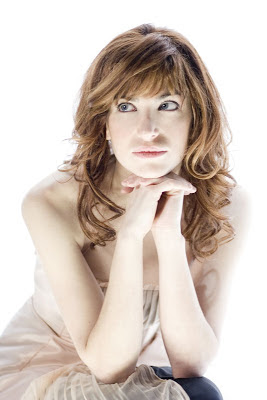 In this Stratfor article Friedman uses Gaza as a slightly forced springboard to a conversation about Nationalistic aspirations that are fragmenting parts of Europe.

The breakup of Yugoslavia is the most drastic example,  there is also the breakup of the Soviet Union and the Velvet Revolution which saw the Czeck Republic and Slovakia go there separate ways others.

Those centrifugal forces also at play in Belgum between the Walloons and Flemmings as well as in Scotland. However, Friedman concentrates on the Ctalonian drive to separate from Spain. It is a good discussion and well worth the read.

For the article's Hot Stratfor Babe I turned to Catalonian actresses and naturally settled upon Marina Gatell. Ms Gatell is an actress who has been, and continues to be, very busy doing Spanish television movies and shows.

Last week was spent obsessed with Gaza. In the end, nothing changed. A war was fought without an Israeli ground assault but with massive air and rocket attacks on both sides. Israel did not have the appetite and perhaps the power to crush Hamas. Hamas did not have the power to compel Israel to change its policies but wanted to achieve a symbolic victory against Israel. Both decided that continued fighting made little sense and allowed the Americans and Egyptians to bless a settlement. Everyone from Iran to the Egyptian Muslim Brotherhood played a role, and then the curtain on this act went down. It will come up again. It was not trivial for those who lived through the conflict, but in the end it changed little.

In this context, focusing on Catalonian elections would seem frivolous, but it is the nature of geopolitics that the quiet and odd may have more significance in the long run than the events that carry noisy headlines.

Catalonia is a region in northeastern Spain. Its capital, Barcelona, is the second-largest city in Spain and the country's industrial and commercial hub. Catalonia is also a region that for decades has had a substantial independence movement seeking to break away from the rest of Spain.

In a regional election held Sunday, the movement for independence remained strong but also became more complex. The regional president, Artur Mas, had called early elections as a way of measuring support for a referendum on secession. Mas' party actually lost 12 seats in the election, though another independence-oriented but more left-wing party doubled its seats. Together, the pro-independence parties increased their share by one seat and have the necessary two-thirds majority to force a non-binding referendum.

Without going too deeply into the morass of regional politics, the long-standing dispute between Catalonia and Madrid has been deepened by the financial crisis and the issue of how the burden will be shared. Originally, Mas had not supported independence but rather greater autonomy for Catalonia. However, he did want a deal with Madrid in which the austerity burden placed on Catalonia would be mitigated. Madrid rejected the deal, which drove Mas toward advocating independence and calling the early elections. With Sunday's election results, the independence movement has become more intense and more radical. The mainstream pro-independence party lost, but smaller and more left-wing parties made gains, a trend we expect to grow in Europe as the economic strains increase.

Since World War II, there has been an underlying principle in Europe that borders are sacrosanct, that they will not be changed. The fear has been that once borders become an issue again in Europe, the tensions that tore Europe apart prior to World War II would re-emerge. This was not universally respected, of course. Serbia's borders were forcibly changed after the Kosovo war (and Spain is one of four EU countries that did not recognize Kosovo due to its own secessionist movement). But the idea of one state making territorial claims on another was contained.

What was not contained was the self-revision of national borders. The two most famous cases were the "velvet divorce" of Czechoslovakia, where two nations, the Czech Republic and Slovakia, emerged peacefully. Nor, obviously, did that principle preclude devolution, or the fragmentation of countries into smaller nationally based entities, in either Yugoslavia or the Soviet Union itself. A wave of countries buried in larger transnational entities emerged in Europe in the 1990s, sometimes peacefully and sometimes not.

This did not mean that tensions did not continue to exist. In Belgium, French-speaking Walloons and Dutch-speaking Flemings have been hostile to each other since Belgium was established in the 19th century. Slovakia and Romania have large Hungarian populations, separated from Hungary under the post-World War I redrawing of the internal borders of the Austro-Hungarian Empire. Occasionally there are mild nationalist rumbles among the Hungarians in both countries seeking reunification. There is a Scottish secessionist movement in the United Kingdom. Northern Ireland is peaceful now but it retains a secessionist movement. There are a variety of such movements in Italy.

For the most part, these movements have not been something to take seriously. Even the Catalan movement is far from achieving independence. Still, we are in a period of European history in which borders are not redrawn primarily due to states seizing territory from each other; rather, the odds that increasingly prevalent secession movements could change the borders are moving from the realm of the preposterous to that of the almost conceivable. That is not a trivial evolution because in such matters the trajectory, rather than the credibility at any one moment, is most important. As pressures build in Europe, what was inconceivable could become surprisingly practical in a relatively short period of time.

The European Summit to discuss the EU budget last week was a demonstration of the degree to which national interest -- and nationalism -- defines the existing European states. The issue in Europe is who is going to bear the burden of austerity that the European political and economic system is imposing. Whatever the idea of Europe might be, the reality is that the political power rests in the nation-states, and the presidents and prime ministers are elected by nation-states. They respond to their constituents, and the constituents want to deflect costs.

The ongoing EU budget dispute is a convenient opportunity for any government that wants to demonstrate to its public that it is being vigilant in minimizing the costs of austerity. The degree of acrimony and indeed hostility among the states -- which formed and shifted coalitions over the budget while trying to shift the financial burden to other states -- was startling if you looked at it through the eyes of 2000. The structures of the European Union are rapidly devolving into its constituent nation-states.

The question of who will bear the burden within nation-states is emerging as an equally divisive issue. This in turn intersects with deep rivers of European history. Catalonia has long argued that it was a separate nation from Spain, based on history and culture, and historically it has had a degree of autonomy. The issue remained relatively quiet until it became clear that Spain's EU membership would have significant economic implications. The tradition of Catalan nationalism then turned from nostalgia to a vehicle to deflect economic pain by shifting it from Barcelona to Madrid.

There is a profoundly important tradition in Europe of romantic nationalism. In its liberal form, it is the idea that every nation has the right to self-determination. The problem is defining what constitutes a nation, and for the romantics that was defined by language, distinct history, culture and so on. It is also defined by self-perception. A nation exists when its inhabitants see themselves as a distinct people. Implicit in romantic nationalism is a conflict. When one notion of romantic nationalism denies the legitimacy of competing claims by a nation's constituent parts, romantic nationalism can become oppressive rather than liberating. In response, the constituent parts sometimes invent national identities for a variety of reasons, destabilizing the whole. The European notion of nationalism can be quite destabilizing and in its most militant form can become brutal.

The hymn of the European Union is Beethoven's "Ode to Joy" from the 9th Symphony. It is a celebration of the French Revolution and the spirit of liberation that followed. The liberation was not only of the individual but also of the nation from dynasties. It was the combination of the notion of individual rights, national self-determination and national identity. The European Union was intended to embody these things. They are not lost but under strain, and the point of the strain is the nation, which, rather than forming a community, now forms competing parts in what is a zero-sum game. Where this ends is the problem, since the history of Europe after Beethoven was not what he would have hoped for.

Just as interesting is what happens to the Catalonias, the buried nationalisms within existing nation-states, that are now prepared to challenge the legitimacy of a country like Spain and demand liberation from it and the right to its own authentic nationalism. What began in the velvet divorce, peaceful and reasonable, now can become much less friendly under the pressure of severe economic pain. What other hidden nationalisms will emerge to use the shield of national self-determination to deflect economic pain? It is easy to dismiss this as an archaic sentiment and as something that cannot destabilize Europe now. But then there is little in European history to allow Europeans that kind of self-confidence.

It is important to benchmark this by the most extreme sort of consequence that we saw in Gaza. Zionism is a movement that grew out of European romantic nationalism. It drew on Jewish history, culture and religion to legitimize the right to a Jewish nation. Palestinian nationalism also grew out of European romantic nationalism. The idea of the nation-state, which took root in the Arab world in the late 19th century and was later promoted by Arab left-wing secularists in the 1950s, very much derived from the idea of nation-states' replacing European empires. The Palestinian national movement derived from this tradition, claiming the right of a Palestinian nation distinct from other nations.

Here we see the bitter side of the "Ode to Joy," rooted in geography. To have a nation, you must have a place that is its own. Ever since the French Revolution, nations have been fighting over their place in Europe. The occupation of Europe from 1945 to 1991 suspended the argument, and from 1991 -- the end of the Cold War and drafting of the EU-forming Maastricht Treaty -- until 2008, the suspension seemed eternal. Very slowly, the inconceivable is becoming far-fetched and the far-fetched merely unlikely.

Romantic nationalism can fulfill a people's dreams or nightmares and usually does both. Gaza gives us a sense of the nightmare, Catalonia a sense of the dreams. But in most places, and in Europe in particular, the distance between dreams and nightmares is not as great as people might like to think. Economic pain coupled with romantic nationalism, now bound together through a massive structure like the European Union that is incapable of understanding the forces that are lurking beneath the surface, have always had a way to generate nightmares in Europe.

It is all inconceivable now. But European history is the history of the inconceivable. I doubt that the founders of Zionism in the 19th century envisioned Gaza as their future.

Gaza, Catalonia and Romantic Nationalism is republished with permission of Stratfor.
Posted by ambisinistral at 6:18 PM

Find out how THOUSAND of people like YOU are making a LIVING from home and are living their wildest dreams TODAY.
CLICK HERE TO FIND OUT