Kane: I sent a man up five years ago for murder. He was supposed to hang. But up North, they commuted it to life and now he's free. I don't know how. Anyway, it looks like he's coming back.
Amy: I still don't understand.
Kane: ...He was always wild and kind of crazy. He'll probably make trouble.
Amy: But that's no concern of yours, not anymore.
Kane: I'm the one who sent him up.
Amy: Well, that was part of your job. That's finished now. They've got a new marshal.
Kane: He won't be here until tomorrow. Seems to me I've got to stay. Anyway, I'm the same man with or without this. (He pins his badge on his vest.)
Amy: Oh, that isn't so.
Kane: I expect he'll come lookin' for me. Three of his old bunch are waiting at the depot.
Amy: That's exactly why we ought to go.
Kane: They'll just come after us, four of 'em, and we'd be all alone on the prairie.
Amy: We've got an hour.
Kane: What's an hour?...What's a hundred miles? We'd never be able to keep that store, Amy. They'd come after us and we'd have to run again, as long as we live.
Amy: No we wouldn't, not if they didn't know where to find us. Oh Will! Will, I'm begging you, please let's go.
Kane: I can't.
Amy: Don't try to be a hero. You don't have to be a hero, not for me.
Kane: I'm not trying to be a hero. If you think I like this, you're crazy. 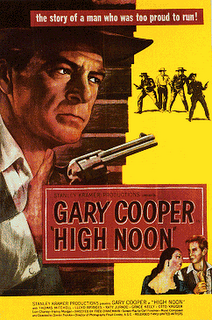 Blackfive talks about cowboys in general and one cowboy in particular.

When I was young growing up in Oklahoma a cowboy was a good thing to be. That was before the yankees and city slickers decided to make it a bad thing, a reckless and unilateral thing. After all cowboys do not care about consensus or committees or sucking up. Once upon a time Cowboys defined what was best about America.
Posted by terrye at 4:31 PM

Terrye,
"Once upon a time Cowboys defined what was best about America."

Assuming they are reasonably well raised, they still do.

I should hope so. If they are not too tame.

Terrye, the war on traditional American culture has seemingly made "cowboy" a bad thing in the eyes of the world - forever.

Wanna know sumpthin'? I don't give a rip.

A very good book you might like, if you haven't read it already. "The Not So Wild West" that shows how quickly the people themselves civilized it. Amazon has two reviews, one by a lefty and another by some one more in tune with my sensibilities. Anyway, it is a very surprising and enlightening read.

"Once upon a time Cowboys defined what was best about America."

Well, if you ignore the holes punched in the dorm walls. Some cowboys these days are drifters, and I suspect it was always so.

But I get your point, and admit to a certain pride in a picture of three of my great uncles herding cattle in Texas back around 1900.

Yes. I have a picture of my great grandfather and his brothers on the prairie, using a horse-drawn drill to dig a well.

Speaking of books and the West, I'm reading my Christmas present from the missus - the 13 volumes of the Lewis and Clark journals. I'm on page 110 and they haven't left St. Louis. I suppose I will get to "O Joy, Occian in View" about 5,000 pages from now.

Mammas, let you babies grow up to be cowboys!

Just wait till you get to the part in the Journals, where, on the return, they come upon a headman just back from a trip to Shoshone country, wearing a necklace of scalps.

Ah, give me the Old West over this shit, anytime.

But, air conditioning, i want that. And a fridge. and a tv.

"Didn't I tell you he'd not shoot?" the dealer pursued with complacence. "You got ready to dodge. You had no cal to be concerned. He's not the kind a man need feel anxious about."

The player looked over at the Virginian, doubtfully. "Well," he said, "I don't know what you folks would call a dangerous man."

"Not him!" exclaimed the dealer, with admiration. "He's a brave man. That's different."

The player seemed to follow this reasoning no better than I did.

"It's not a brave man that's dangerous," continued the dealer. "It's the cowards that scare me."

Owen's ideal, however reality-based, was born in print of the fictive variety ten or so years after "the thieves brought ruin on themselves as well" and had a good sixty year run, but then a guy named Peckinpah killed him at the end of Ride the High Country and this time, in moving pictures of the fictive variety, he wasn't resurrected (though he had a long death scene on the small screen.) Enter the Man With No Name and the Wild Bunch.

Well, sir, you are a cowardly son of a bitch! You just shot an unarmed man!

Well, he should have armed himself if he's going to decorate his saloon with my friend.

Tonight I can read The Virginian and/or Cities of the Plain and watch Ride the High Country and/or Unforgiven.