Enjoy It While It Lasts 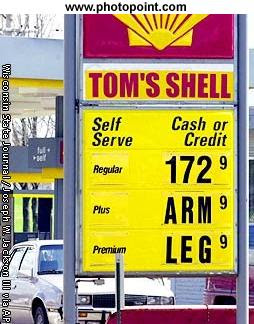 During the Summer of 2005 I bought my first $3.50/gallon gasoline, on the San Juan Islands in Washington, only to discover upon returning home that, far from being a local phenomenon within Washington, the price had spiked locally too and I was forced to pay $3.25/gallon here in Boulder. I thought I was a goner. When the untimely death of my minivan forced me to buy a new car last January, I accordingly selected one which gets 35 miles to the gallon, having calculated carefully that the monetary advantage of a Prius getting 45-55 mpg would not justify the extra upfront cost, amortized over 10 years, even at the expected price of $5.00/gallon for gasoline. I gradually and painfully adjusted my thinking to the new reality of $3+/gallon henceforth.

One theory advanced before the recent election was that the oil companies, those all-powerful omniscient price manipulators, were foregoing billions of dollars of profits in order to keep the Republicans in office. The American electorate wisely saw through that and turfed the Republicans out anyway. Now I guess the Evil Oil Barons are cleverly throwing away even more money in order to keep the Democrats in office....(cont.)


Another theory, one which I myself bought into, was that increased demand in India and China had moved prices up sharply as an elementary example of classic supply and demand in operation. I have no doubt that demand for oil and gasoline products has risen dramatically in both countries as they have started to get rich during the last decade. Apparently, according to this theory, both countries have suddenly quit driving during the last year or so, and prices have dropped back to something downright comfortable as a result. Not likely.

What's the real explanation? Who knows? I think the oil market is simply way too complicated to easily model. If it were easy, lots of big trading companies would be making spouts of money without risk. As demand rises in India and China and elsewhere, the price goes up, sure, but with a higher price, it suddenly becomes worthwhile to drill in lots of places that weren't worth it before and supply starts to increase. That tends to drive the price back down, and who knows which way the big oil producers like OPEC are going to jump, given all this uncertainty?

I don't know about Goldman-Sachs, but for me I'm afraid the price of gasoline is about as predictable as the date of the next blizzard in Colorado. I say, let's enjoy it while we can.
Posted by MeaninglessHotAir at 6:32 PM

I don't remember where I read this, but I did read that demand in the industrialized world fell by .6%. that is not alot, but it was a decline. It could be people are doing what you did and buying more fuel efficient vehicles. It could also be the milder than usual winter and it could be that there has been an easing of some speculative panic in the market. Who knows?

Damn watermelon. You probably recycle too.

If we're ever going to break away from oil bondage we have to use it all up - Hummer's are the ticket.

I'm still waiting for more on that really deep find that Chevron announced last year. And if the tar sands were turning a profit when oil was at $40, I suppose that they still are doing so.

Reserves will definitely drop under the 40 year mark at some point. Just don't ask me when it might be.

I think it is a combination of things, as terrye suggests. The supply has been gushing but demand slumped, leaving a lot of oil around. We have been having a warmer than usual winter, so demand for heating oil has been way down. Gee, if it's warmer in winter, people use less heating oil and produce less CO2...Hmmm. Call the Hockey Team to run another multiple regression on bristlecones in 2006, so we can make this warming work and make the world safe for centralized planning. OPEC is not of one mind and as Rick has noted, it is a liar's club. But mostly, it's because Bush is Hitler and this is part of his brilliantly evil but ultimately incompetent ploy to score SuperBowl tickets for all Haliburton executives.

Over the holidays I was down in OK visiting my mother. Every year after Christmas my aunt and uncle also have their family gathering at a religious boarding school in Kansas, some 60 - 70 of them using the vacant dorms. While there I sat in on the discussion of a contract assigning gas rights on some 40 acres of my uncle's property. Pretty complicated contract, actually, running some five or six closely printed pages. Naturally, there were a number of my cousins sitting around the table arguing the merits. What I thought interesting, apart from the obvious Beverly Hillbillies connection, was that there was a gas company out collecting the drilling rights all over the area. Not that they were going to drill anytime soon, but as a demonstration of supply and demand in action it was interesting. I think that some of the shallow stripper wells that had been shut down were also back in action. Gas was the main thing, though.

Naturally, the headlines in the paper when I flew out of Tulsa announced that natural gas prices were down ;)

"We have been having a warmer than usual winter"

Well, I'm glad somebody has.

They have been pushing those gas contracts around here too. Gale refused to sign the ocntract they aoffered him. He is contrary.

I strongly suspect that oil prices will continue to decline. Saudi Arabia is likely to let the price drop so that Iran’s economy is damaged. The royal family is almost certainly worried about Iran’s possible nuclear weapon capability.