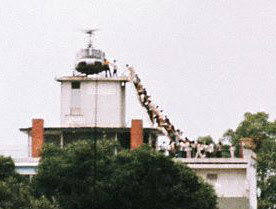 Luther McLeod raised a very legitimate concern regarding the possibility that the Copperheads of the 110th Congress might be able to replicate the betrayal of the Vietnamese people by the 94th Congress, with the substitution of Iraqis for Vietnamese. While I agree with Luther's central premise that the current Copperhead ranks have a sufficiency of deserting cowards which, left to their devices, would turn and run (with some Republicans giving them a race to be first to the exit), I believe the likelihood of helicopters departing from the roof of our embassy in Baghdad to be rather low.

Richard Nixon's resignation in August of 1974 presaged an electoral defeat of Republicans that makes '06 seem comparatively picayune. The Copperheads picked up 49 House seats, increasing their majority lead to 147 seats while adding 4 seats in the Senate to raise their total to the magic 60 number. The Copperheads were actually able to add one more seat in both the House and the Senate in '76. In '78 the electorate began expressing its regret, the tide turned and Copperhead legislative power ebbed (with a few exceptions) until last year.

The point of the electoral review is that the Copperheads of '74-'77 had 'mandate' level authority backing up their perfidy - and threw it all (and more) away, much as Miz Clinton destroyed her husband's chances for passing anything meaningful during his tenure with her overreach on health care. In '06 the Copperheads 'won' by dressing their candidates up as moderates and it's very difficult to pick out a real white feather artist among the freshman Copperheads. The truly loud mouthed runners are all shouting from the parapets of their castles in the Blue Baronies.

The other truly sad factor as to why we won't be leaving Iraq as we left Vietnam is that Vietnam actually had very little strategic value. The Copperheads knew (or thought they knew) that betraying the Vietnamese people had a low geopolitical cost. The Vietnamese were disposable. The geopolitical political cost of betraying the Iraqis would be much higher and both parties know it.

The President has doubled down on the Petraeus Plan and part of the bet is laying out some very clear metrics to use as clubs come September when the Copperheads start howling again. I'll admit to a certain level of disenchantment with the President's recent play acting on immigration but I still would not bet against him on this one.

There will be a large troop draw down next year but it won't be because the "war is lost" - and it won't be a betrayal in any sense.

Email ThisBlogThis!Share to TwitterShare to FacebookShare to Pinterest
Labels: Iraq

But what I really garner from your post, unless I misread, is that we have until January 20, 08 too get something done.

I don't see helo's launching from the Iraqi embassy. We are much better learned in the nuances of surrender and retreat nowadays. It will be more sophisticated this time.

An important point you make is Republicans rushing too be first at the exit. Supporter's of the war have few allies when you get right down too it. I, at times, feel we are in a distinct minority.

As far as the strategic value equation. Wouldn't the Dems love having us do with less oil? Fits right in with the AGW meme.

Really, I'm much too cynical. I do not trust the Dem's nor quite a few Repub's to have the spine to do what is right. Which is to give the Iraqi's a decent chance at survival as a, however differently from ours, participatory democracy. That may be, based on your previous observations, an impossible dream. In which case, we may well have 200K troops in Kurdistan for the next fifty years. Or, we can unleash our potential.

I think we'll have 10 brigades in Iraq for a very long time maybe 30-40 years). I can't make a good guess as to where they will all be located but Kurdistan will have a fair chunk.

The Dems will squeal for their lefties (and run Obamaramas to suck up the loose change from the suckers) but they know we can't leave - not while the mad mullahs are parked next door.

As to participatory democracy - not impossible - but not anything like what we have either. The illiteracy rate is far too high, average intelligence far too low and democracy really is incompatible with the death cult. Rising income (say, from an equitable distribution of oil revenue) and the secularization that inevitably follows rising income might lead to something like Turkish democracy but it's a very long way off.

Just my opinion, of course. Democracy was never at the top of my wish list - decent protection of minorities ranks way ahead in my book.

The deciding factor is the location of the cameras. When the cameras were in Vietnam, showing people getting killed or wounded every night, it gradually tore at the American mind, larger than life. Once the cameras left, then *poof* there was no more blood and gore to worry about in Vietnam. Once again the deaths and destruction there was in the realm of the socially acceptable. There aren't any cameras showing all those gory highway deaths. The important thing here is that the Democrats are promising to remove the cameras. As for the deaths, bombings, beheadings that will ensue, well, it won't really matter, any more than millions of murders in Vietnam mattered, because no cameras will see it.

It is very difficult to say. While the temptations of defeat are strong, there are some distinctions between Vietnam and today. Certainly as MHA says, it depends on where the cameras are pointed. Or it did depend on where they were pointed, back when they monopolized the information flow. Today, I am not so sure their feat could be duplicated.

Second, one could argue that the threat today can be seen as more immediate. It feels kind of strange to say it, having grown up living with the threat of thermonuclear war, but the Islamofascists appear much less rational than did the Russians, and much more apt to attack us where we live. We always assumed that a war with Russia would either be triggered by accident or be at the end of a long series of provocations, diplomatic maneuvers, and perhaps conventional battles leading up to such a war. There was a rationality to the calculus and whole military industries grew up around this assumption. Today none of that applies, which makes prediction next to impossible.

Finally, little by little the Leftist myths surrounding the Islamic world are being chipped away. Today America learned that the plotters in the UK were young doctors, not "disenfranchised" youths. The chaos resulting from the fighting between Fatah and Hamas has put the lie to the Palestinian state. And little by little the fact that this is a global war is penetrating all of our minds - Thailand, pirates off the Somali coast, jihadis in Trinidad, South Africa, Europe, the Philippines. It is becoming increasingly difficult to rationalize this away, or connect all of these atrocities in all of these places simply to American policy, or to describe them as being only a reaction to the current inhabitant of the White House.

So there well may be a retreat, but probably only a temporary one.

Related, and, I guess, weirdly entertaining, Spengler of the Asian Times fantasizes the Kennebunkport meeting.

"So there well may be a retreat, but probably only a temporary one."

If the Iraqis pick up the security load, how would a withdrawal of unneeded forces be a retreat? We've armed the Sunnis and recognized their militias, the Kurds don't need much protection and the Shia appear to be getting a little tired of Mucky.

If the situation stabilizes in Baghdad then I don't see the need to maintain a high level of forces in Iraq. I think that they'll sort out AQ using their methods faster than we would.

If the situation stabilizes in Baghdad then I don't see the need to maintain a high level of forces in Iraq.

True, in theory. But there are still too many ifs. What about Iran? And the Kurds and Turks? And I'm sure that AQ will make a push to destabilize Baghdad in 08. Lots of open-ended stuff still. If things work out I can see - over the very long term - some permanent force of maybe 50,000 soldiers and contractors, but it is premature to talk numbers at this point. Just a WAG. The stabilization of Baghdad is the key. If AQ can't manage to get frequent headlines as they attempt to kill Americans and disrupt the city while the 08 campaign is in swing, then they can't do nothin'. Time will tell.

There's always the chance that the Dems will reverse and get real about the war, as 08's approach finally begins to force them to act like they can govern.

That would be very bad for AQ. Bloody late, but what else is new.

Referencing an earlier comment, by me, down below, by my own admission, I am at times shallow. I have no problem with that.

Not that anyone has claimed differently, but none of us has the slightest clue what might hold a year from now.

We are floating on the motes of history. In control of our destiny, seemingly, but in actuality not using the power we have to ensure that future history might reflect our preferences.

We are swayed by the puny who should reside in the dust bin of history, but yet still warp the direction of the world.

Stand up or be beaten down.

That is the choice as I see it. Simplistic it is. I was just a 'field' Marine after all. Field=expendable for the unknowing. No regrets.