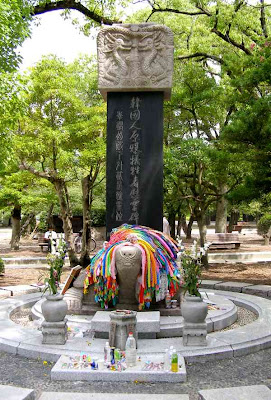 (Note: this was first posted on November 17, 2009. I'm bumping it for today's anniversary of the Hiroshima bombing)

A couple of years I happened to visited Hiroshima on August 7th, one day after the 63rd anniversary of the atomic bombing of the city.

When you get off the streetcar from the train station the first thing you see is the ruin of the Hiroshima Prefectural Industrial Promotion Hall. The atomic bomb detonated almost directly overhead of the building. With its few still standing walls, and its dome stripped and leaving only its framework, it is the iconic ruin of Hiroshima.

When you stand at that building, if you turn in a circle you realize your standing in a bowl surrounded by hills. Most of the rest of the buildings in that bowl were reduced to rubble by the bomb blast and resulting fires.

When they cleared the rubble they set aside several blocks of the old city as the Peace Memorial Park. You walk south along the river to get to the entrance to the monuments. At the entrance card tables are set up where there are petitions for peace that can be signed. You can buy peace t-shirts and listen to folk musicians strumming guitars and singing about peace. It is a fitting sentiment for this place.

The most visited monument is the Children's Monument for Peace. A young girl named Sadako Sasaki contracted leukemia after the bombing. As she sickened in the hospital she remembered an old Japanese saying that if one folds a thousand paper cranes one is granted a wish. She spent the rest of her short life folding paper cranes, but died before she reached one thousand. The Children's Monument for Peace was built in her memory, and in memory of all the children who died from the bombing. It is covered with paper cranes that school children have folded and sent to the park.

As touching as he Children's monument was, I most wanted to see a different monument. The monument pictured with this post. The Monument in Memory of the Korean Victims of the A-bomb.

There were tens of thousands of Koreans in the city when it was bombed. Most were forced laborers who had been brought to the city, housed in barracks and worked in the munitions plants of Hiroshima. Some 40,000 were killed, and a another 30,000 injured in the bombings of Hiroshima and Nagasaki. Most of the Koreans in Hiroshima were from Hapcheon, South Korea, and so sadly two cities ended up bearing the brunt of the attack (Atomic bomb survivors in South Korea still feel the wounds).

The Korean Monument was built in 1970 by South Koreans living in Japan and sited across the river and outside of the Peace Park. The Japanese authorities would not allow it to be placed in the Peace Park. It took until 1999 for permission to be granted to move it onto the Park's grounds. 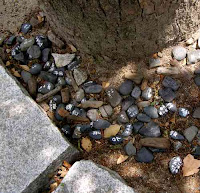 As I stood in front of that Monument I could not help but reflect that all the paper cranes in the world would not have helped the dead honored by this memorial. That the peace petitions, while a fine sentiment, were no more substantial than Chamberlain's umbrella.

The Germans dressed prisoners up in Polish uniforms and shot them to justify their invasion that started the wider war in Europe. The Japanese used bayonets to stage their low tech version of Hiroshima in Shangai as they spread ever deeper into China. The allies pounded cities with high explosives and incendiaries from the air. All across the globe men died in combat and civilians died behind the fronts. Some were venal, many were innocents.

A few days after Hiroshima's destruction Nagasaki was bombed. Hirohito then taped his surrender speech. That night a cadre of Japanese officers ransacked the palace seeking to destroy the recording and postpone Japan's surrender. How do paper cranes and petitions solve that sort of madness?

In the end, to me at least, this small place in the Park was less about the bomb and more about Korean farmers taken from their villages and used as forced labor. A life spent at the whim of masters. Another tragedy of the war.

My family and I were the only people at the monument when we visited it. The insciption on it reads, "Souls of the dead ride to heaven on the backs of turtles." At its base are small stones with Korean characters painted on them (pictured). The guidebook said you should leave a gift for the slain worker's ghosts. All I had were a couple of cigarettes. I supposed the ghosts might like to relax with a smoke and so I left them. It was all that I could do.

Our petty hatred never die, do they? I'm referring to Japan's reluctance to permit the Korean memorial into the Peace Park.

Now the Japanese, on their way to committing cultural (and racial) suicide) face the irony of having Korean nationals caring for their bodily needs as they age out of this mortal sphere. Only this time, their Korean "servants" will be paid, and paid well, for what there is no one else left to do.

The mills of God grind slowly...

Don't you think we ride to heaven on the backs of turtles so that it takes us a very long time to get there? Going to anywhere on the back of a turtle would be an interminable journey, time to sort out our mistakes, unkink our very selves...

This was a very moving - and thought provoking - post.