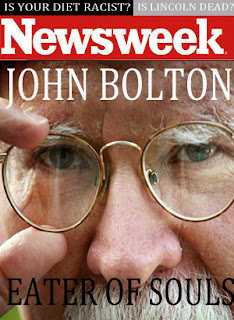 In his article Future Newsweek Covers Daniel Greenfield, after the Queen of Rage cover, imagines the depths of anti-Republican propaganda the magazine might sink to in future covers.


"Newsweek Magazine sold for less than the face value of a single issue and it was still too expensive at the price. Now it's using the same marketing strategy as crazy people who ask for change on the street and Michael Moore. Offensive photoshopped covers.

But for now it's not hard to imagine where Newsweek is heading next. And to save its editors the trouble of figuring out which Republican presidential candidate they want to feature with vampire fangs, here are the future Newsweek covers.

The Bolton cover was my favorite of his satirical photoshops, but the rest of them were also good. His comments about the articles in each of the magazines are also entertaining.

He ends it with an Obama cover and introduces the concept of an armpit halo at the same time. Be sure to follow the above link to see all of the covers.