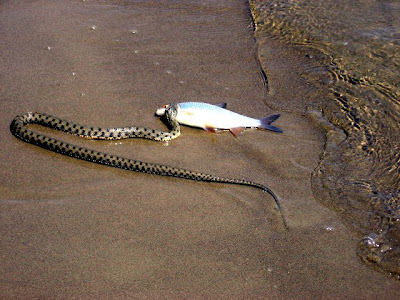 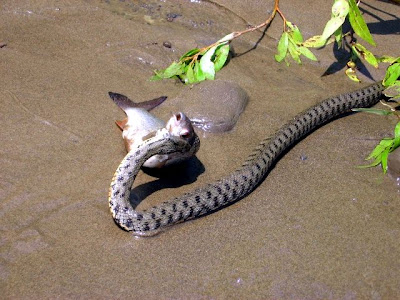 EnglishRussia has a post about a snake attacking fish. Supposedly the snake hunted the fish, dragged it out of the water while biting down on its gills to suffocate it and then dragged it inland. All this even though the fish was too big for it to eat. Then he ads details about the snake being poisonous and stealing bait fish from humans.

Hmmm... add lightning shooting out of their butts and we might be dealing with Mongolian Death Worms instead of snakes.


Posted by ambisinistral at 8:00 AM

I'll join you in calling BS on this one. In the second photo I see what looks like a shoeprint (look to the left of where the snake bends upward off the ground - looks like a flat-soled shoe of some sort stepped there. Also, that bend in the snake looks unnatural to me - that sucker is stuffed with a stiff wire of some sort.

And no marks from a snake moving through sand in either photo. I'm no expert on snakes but from what I've seen of them they do leave tracks of sorts in soft stuff when they move through it. Might not recognize it if you didn't see the snake but, well, I can see the snake here and don't see any marks.

All that said, for those interested in the oddities of wildlife, especially the backyard variety...

This past Saturday I was out in my backyard picking a cat off the fence (long story) when I sorta heard something off to my right slightly behind me. It was one of those sorta not quite aware interruptions and I turned to look. I saw a pigeon flop to the ground (obviously dead or seriously stunned) and then noticed a red-tail hawk beating wings away from the scene.

Quick thoughts like, "maybe it shook free or maybe it was too heavy" scooted through my dim brain but then I didn't notice any feathers flying around and the bird looked dead enough to star in a Monty Python skit - 'twarn't kicking up any fuss at all.

I tended to some business back in the house figuring I'd clean the bird up soon enough or maybe the hawk or a local vulture might grab it quick. The wife came home and notified me there was a dead bird in the yard... I inquired when she'd first seen it... before she left for the grocery store...

Don't know what killed the bird. It wasn't the cat on the cold wood fence (I know her and she ain't killing birds any longer).

It was stiff as a board when I cleaned it up a few minutes later. Odd that the hawk would try to grab carrion.