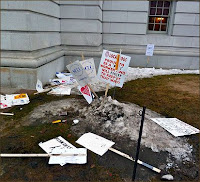 One of the items of Governor Walker's budget repair bill was that public unions had to recertify on a yearly basis. The vote to recertify had to be 51% of total union membership, not just of votes cast in the election.

This has already caused the Teaching Assistants Association which represents the University of Wisconsin system graduate students to decertify when they failed in their vote.

And yes, you read that right -- graduate students had to pay union dues up until this year.

The percentages of that vote were not revealed. Nor have the numbers of union members who have opted not to pay their dues. One can assume both numbers are bad because the Wisconsin Education Association Council (WEAC) recently had to lay-off 20% of their staff and yesterday the Milwaukee Journal Sentinel reported that the WEAC isn't going to push recertification, rather they'll allow local groups to make that decision on their own.


So far, the Wisconsin Education Association Council had been one of the more aggressive unions in considering recertification elections in spite of the high standards.

But now the umbrella union is saying it will leave it up to local affiliates to decide whether or not to seek recertification.

"The Wisconsin Education Association Council continues to find value in the recertification process, because recertification enables the union to provide the greatest level of support to members," WEAC president Mary Bell said in a statement Monday.

The unions spent huge amounts of money in this fight and consistently came up short. Also, the collective bargaining restraints have meant the union's insurance consortium (and what a racket that was) has either lost contracts or had to cut the amount they charged dramatically. As a result the unions will be facing a much smaller balance in their treasuries for the next round of the fight. Walker is pushing them back very effectively so far.

Posted by ambisinistral at 8:00 AM