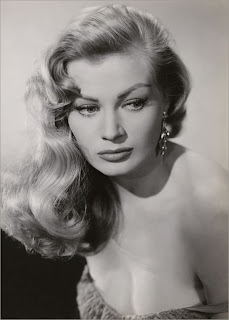 This Stratfor article by Ashley Lindsey examines the militant's tactic, in the Middle East and south Asia, of targeting tribal leaders for assassination to try to influence tribal politics through intimidation.

The topic is broached because there has been a recent killing of Egyptian tribal leaders in the Sinai. This is an area that, under the terms of the Camp David Accords, is weakly garrisoned by Egypt and, because of its proximity to Israel, is an area that militants would very much like to control.

Ashley gives and overview of the tactic of targeting tribal leaders elsewhere in the region, and the returns to the Sinai with thoughts about the possible effectiveness of the tactic, as well as things we might watch for to see if it is succeeding or receiving significant push-back.

For the article's Hot Stratfor Babe I naturally searched for female tribal leaders in the movies and that naturally lead straight to Amazon women in fur bikinis. After an exhaustive search of the rich pickings in that respected genre I selected Anita Ekberg for her role as Queen Na-Eela in Gold of the Amazon Women.

I've actually seen Gold of the Amazon Women and I must say it is a fine representative of the Amazon babe genre. The link above is to a review of it that gives a good accounting of the nonsense that takes place in the film.

Ms Ekberg had a rather odd career, appearing in a number of feature films, most famously La Dolce Vita, as well as mixing in a lot of B-movie cheese like Gold of the Amazon Queen as well as TV roles of varying caliber. Later in her life she seemed to regret having played the studio system too much rather than taking care to further her career in a more serious manner. Considering the fact she was always marketed as a bombshell, I'm not sure that was a realistic regret on her part.

Sadly, now in her 80s, Anita has fallen on hard times. After falling and breaking her leg, her house was first burglarized and then caught fire. She is presently destitute and living in a nursing home and appealing for assistance.

Militants killed Egyptian tribal leader Khalaf al-Menahy and his son Aug. 13 as the two were returning from a conference in east Sinai organized and attended by tribal leaders to denounce militancy, according to Sinai security forces. The senior al-Menahy was a prominent proponent of bolstering the Sinai Peninsula's representation in Egypt's parliament and of improving security in the region. He also was a prominent sheikh in the Sawarka tribe, said to be the largest in Sinai. Following his burial Aug. 13, the tribe vowed to seek vengeance.

This is the first reported case of militants attacking tribal leaders in Sinai. It comes soon after an attack on Egyptian security forces Aug. 5 and an attack on military checkpoints in northern Sinai on Aug. 8.

Although the militant tactic of targeting tribal leaders is new to Sinai, the tactic has been common in conflict zones in the Middle East and South Asia, such as in Yemen, Iraq and the Afghanistan-Pakistan border region. Though it can offer many benefits to these militants -- including weakening the targeted tribe and possibly leading to its co-option -- these kinds of attacks tend to only succeed in zones with little government control and against tribes that cannot effectively retaliate. Examining similar instances of this tactic thus provides a helpful tool for assessing the consequences of attacks against tribal elements in the Sinai Peninsula.

Al Qaeda in the Arabian Peninsula has operated openly in Yemen's tribal-dominated southern and eastern provinces for years. It has sought to expand its presence and operations by winning over local tribes using tactics such as strategic marriages.

Lately, it appears to have begun a shift from wooing tribal leaders to intimidating them. Al Qaeda in the Arabian Peninsula recently failed in an attempt to assassinate tribal leader Majed al-Dhahab in the city of Radda in Bayda province. An important tribal leader, al-Dhahab participated in the offensive to drive al Qaeda -- and his own cousin, a local al Qaeda leader -- from the region after the militant group seized control of Radda in January. Al-Dhahab's son received a package that unbeknownst to him contained a bomb, which he was instructed to give to his father. However, the package exploded in his arms Aug. 4 before he could deliver it. Immediately after his son's death, al-Dhahab received a call warning him that the group would kill anyone who opposed it.

The group followed up with another attack on tribal elements Aug. 5. A suicide bomber detonated an explosive device at a wake in Jaar, killing 45 people. The dead included several tribal fighters who had participated in the June Yemeni government offensive against al Qaeda in the Arabian Peninsula, and the wounded included a tribal leader.

The region's tribes have not publicly vowed to retaliate against the militant group. If they are capable of doing so, they probably will respond to al Qaeda in the Arabian Peninsula's attacks. But the tribes could be too weak to mount an effective response, especially in the wake of attacks on their leadership structure. This could cause some tribesmen to abandon the fight, allowing militants to try to resume activity in the region's towns should they wish.

Iraq and the Afghanistan-Pakistan Border

Although new to Yemen, militants frequently used the tactic of attacking tribal leaders during the U.S. involvement in Iraq and Afghanistan. The tactic is still frequently used, especially in the Afghanistan-Pakistan border region. In one significant instance, in 2007 al Qaeda in Iraq assassinated high-profile Sunni tribal Sheikh Abdul-Sattar Abu Risha, who led the Anbar Awakening Council. A U.S. ally, Abu Risha had formed the council, uniting dozens of Sunni tribes in the province against al Qaeda in Iraq. His killing backfired on the militant group, generating a massive outpouring of sympathy for Abu Risha and prompting the tribes in the province to join in vowing to fight al Qaeda in Iraq to the death.

In southern Afghanistan and northwestern Pakistan, the Afghan Taliban are deeply embedded into the tribal system. They have effectively used the tactic of assassinating tribal leaders to eliminate obstacles to their operations and evolution. To this end, they regularly employ suicide operations, armed assaults and roadside bombs against anti-Taliban militias known as lashkars and against tribal leaders in northwestern Pakistan.


One area particularly affected by such attacks is Bajaur, a Pakistani agency that borders Afghanistan's Kunar province. After numerous attacks on tribal leaders and members of peace committees in Bajaur, the Mamond tribe announced July 25 that the tribal leaders had formed a lashkar to prevent cross-border attacks. Hundreds of elders, leaders and religious figures of various subtribes and peace committees pledged their support for this militia. As with the killing of Abu Risha, the Afghan Taliban attacks on tribesmen and leadership in the region spurred a fiercely united response across numerous tribes, with the new militia even expressing a willingness to enter Afghanistan to attack Taliban leaders.

Upsides and Downsides of a Militant Tactic

Success for a militant group in the long term happens under two conditions. First, the militants must be acting in an area with a tribal patronage network and limited government oversight. Without such a network, attacks on tribal leaders in efforts to co-opt and intimidate that tribe would not provide any significant gain. In Yemen, for example, the patronage and tribal network are very strong and in most cases enjoy greater legitimacy and power than the government. Attacks against tribal chiefs there are accordingly tantamount to attacks on the local government. On the one hand, that means tribal networks can band together and shun foreign militant elements as one community. On the other hand, if al Qaeda in the Arabian Peninsula is able to coerce a tribe into aligning with it, the militant group will then enjoy access to that tribes' resources, will gain the ability to plan and launch attacks in that area, and could even gain better relations with neighboring tribes.

Second, the group must be militarily capable of overwhelming the targeted tribe and its allies or at least of gaining the upper hand. As can be seen from the Iraq example, killing Abu Risha backfired because his tribe was large, committed and militarily strong, and it had the support of several allied Sunni tribes that belonged to his Anbar Awakening Council.

The tactic of targeting a tribal leader thus comes with certain risks. When the aforementioned two conditions are not met, a militant group exposes itself to great danger when it targets tribal leaders.

Consequences of the Sinai Assassination

The Sinai Peninsula meets the requirement of limited government control and strong tribal networks. The question then becomes whether the Sinai tribes can muster a strong defense against the militants. In the coming weeks, it will be important to look for signs of the retaliation pledged by al-Menahy's Sawarka tribe and others allied with it. This retaliation could come in the form of attacks against the militants passing through Sawarka and its allied tribes' territory.

Tribal retaliation could also come in the less aggressive, yet still effective, form of supplying increased logistical support and intelligence to the Egyptian government. Increased weapons seizures and the arrest of key leaders suggest that tribal sources on the ground are providing intelligence to Cairo. A targeted campaign against the militants already has begun, with Egyptian planes bombing the mountains of El Arish on Aug. 15. The intelligence for these attacks likely came from local tribes.

Targeting Tribal Leaders: A New Militant Tactic in Sinai is republished with permission of Stratfor.

Posted by ambisinistral at 5:31 PM

Searching for the Ultimate Dating Site? Join and find your perfect date.