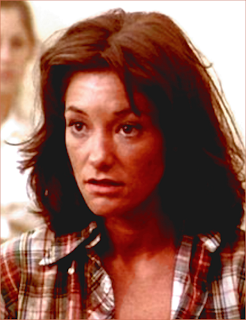 In this Stratfor article, in light of the recent spate of attacks in the U.S., Scott Stewart discusses non-jihadist domestic terrorism. He gives a nice history of extremist violence, from both the left and right sides of the political spectrum.

It is a nice overview. I had never thought about it, but he raises an interesting point that domestic terrorists embraced the "leaderless" model of terrorism long before jihadists, out of necessity, embraced it. It's reminder that terrorism is a tactic that can be bent to any political end.

For the article's Hot Stratfor Babe the movie Helter Skelter sprang to mind. Charlie Manson and his Family, with their whackadoodle scheme to start a race war via mass murders, certainly fit the mold as an old terrorist organization.

I remembered the fine job Nancy Wolfe did portraying the insane Susan Atkins, so I selected her to receive the prestigious Host Stratfor Babe award.

Ms Wolfe has a rather odd resume. She made a few films in the mid 1970s, with Helter Skelter being her best known part. She then more or less disappeared until 1997 when she started appearing in small roles in studio pictures. I wonder what she did in in the gap?


Domestic Terrorism: A Persistent Threat in the United States
By Scott Stewart, August 23, 2012

A string of incidents over the past month has served as a reminder that despite the intense, decadelong focus on the jihadist threat, domestic terrorism is still an issue in the United States. On Aug. 5, Wade Page opened fire on the congregation of a Sikh temple in Oak Creek, Wis., killing six and wounding three others. Though Page killed himself and did not leave any evidence explicitly listing his motives for the attack, his long association with the white supremacist movement was clearly a factor in his target choice.

On Aug. 15, Floyd Corkins shot and wounded a security guard in the lobby of the Family Research Council's office in Washington after the guard blocked him from entering the office. Corkins reportedly was carrying a bag containing a box of ammunition and a number of Chick-fil-A sandwiches. He apparently targeted the Family Research Council because of its public support for Chick-fil-A in the wake of the controversy over statements made by the fast food chain's founder regarding gay marriage. According to media reports, Corkins said, "I don't like your politics," before opening fire.

And on Aug. 16, an off-duty sheriff's deputy was shot and wounded while working as a security guard at an oil refinery in St. John the Baptist Parish, La. When two other deputies responded to a nearby trailer park where a vehicle reportedly associated with the shooting was spotted, the trailers' occupants ambushed and killed the deputies. An additional officer was wounded, along with two of the suspects involved in the shooting, Brian Smith and Kyle Joekel. Seven people have been arrested in connection with the incident, including Smith's father and brother. News reports indicate that the group was associated with the sovereign citizen movement, and members of it were under investigation for weapons offenses and previous threats to law enforcement officers in other states.

All three of these incidents stem from distinct ideological streams: the white supremacist skinhead movement, the radical left and the Posse Comitatus/sovereign citizen movement. While unrelated as far as timing and motive, when taken together they show that extremist ideologies subscribed to by certain individuals on the fringes of U.S. society continue to radicalize some to the point that they are willing to take violent action in accordance with those ideologies. Domestic terrorism is thus alive and well.

Indeed, as we look at all of the recent attention being paid to lone assailants and small cells, it must be remembered that anti-government and white supremacist leaders in the United States embraced the leaderless resistance model of operations long before jihadist groups began to promote it.

In 1989, William Pierce wrote his novel Hunter, which detailed the exploits of a fictional lone wolf named Oscar Yeager and was loosely based upon real-life lone wolf Joseph Paul Franklin. In 1990, Richard Kelly Hoskins published a book titled Vigilantes of Christendom, in which he introduced the concept of a "Phineas Priest," or a lone wolf militant chosen and set apart by God to be his agent of vengeance upon the earth. In 1992, former Ku Klux Klan leader Louis Beam published an essay in his magazine, The Seditionist, that provided a detailed outline for moving the white supremacist movement toward a leaderless resistance model. Jihadists such as Abu Musab al-Suri first began to promote leaderless resistance only after the U.S. response to the 9/11 attacks began to severely affect al Qaeda. But even so, groups such as al Qaeda in the Arabian Peninsula did not really embrace al-Suri's concept of leaderless resistance until late 2009, and the al Qaeda core did not follow suit until 2010.

The recent spate of incidents is also not all that unusual. Other examples stand out in recent years of different streams of domestic radicalism leading to a confluence of attacks by different types of actors. For example, on April 19, 1995, a large truck bomb built by anti-government extremists Timothy McVeigh and Terry Nichols detonated outside the Alfred P. Murrah Building in Oklahoma City, killing 168 people. Five days later, on April 25, timber lobbyist Gilbert Murray became the third fatality and final victim of Unabomber Theodore Kaczynski's long Neo-Luddite bombing campaign.

Another such convergence occurred in the summer of 1999. After conducting arsons at three Sacramento-area synagogues, brothers Matthew and Tyler Williams killed a gay couple in their home in Happy Valley, Calif., on July 1. On July 2, World Church of the Creator adherent Benjamin Smith began a multistate shooting spree that killed two and wounded nine and that only ended when he killed himself July 4. On Aug. 10, former Aryan Nations member Buford Furrow mounted an armed assault against a Jewish day care center in Los Angeles, during which he wounded five people before killing a Filipino-American mailman on the street.

Domestic terrorism in the United States is a cyclical phenomenon. There are discernable peaks in that cycle, like those we've discussed -- and like the one the country is currently experiencing. The intense political polarization that has occurred in recent years in the United States, the widespread distrust of the government on both the extreme right and the extreme left, and the current election-year rhetoric will further inflame political passions. This means that the current cycle of domestic terrorism plots and violence is likely to continue for at least the next several months.

While domestic terrorism is currently at the peak of the cycle in the United States, it is important to remember that most domestic terrorism cases tend to be simple attacks conducted by a lone actor or small cell. There are far more instances of simple bombings, such as those conducted by Olympic Park bomber Eric Rudolph or animal rights bomber Daniel Andreas San Diego, than the sort of large truck bomb attack committed by McVeigh and Nichols, which was an anomaly. Even more common than bombing attacks are the armed assaults that we've seen recently, and they are generally implemented against soft targets -- something we've talked about in relation to other terrorist threats.

And that means that the implications for domestic terrorist threats are essentially the same as they are for the jihadist or Iranian threat. First, it is critical for people to remember that terrorist attacks do not appear out of a vacuum. Individuals planning an attack -- no matter what their motivation or ideology -- follow a discernable cycle, and that cycle involves behavior that can be identified and detected before the attack is conducted. Indeed, it appears that the Smith family and their associates involved in the Louisiana shooting were known by authorities in several jurisdictions and were considered armed and dangerous.

It is also important for individuals to understand that it is physically impossible for governments to protect all potential targets from every sort of attack. This means that many places are vulnerable to an attack, should an assailant choose to strike and should the assailant's preoperational activities go undetected. Therefore, citizens need to assume responsibility for their own security. This involves citizens not only reporting suspicious activity to the authorities, but also practicing good situational awareness and having updated and appropriate contingency plans in place for their families and businesses.

Domestic Terrorism: A Persistent Threat in the United States is republished with permission of Stratfor.
Posted by ambisinistral at 8:02 PM