Greetings meatsacks, it is I -- The Robotolizer -- here to once again attempt to enlighten your feeble human brains on a matter of great importance in the area of robot/human relations. I've already written about that scoundrel Isaac Asimov and his intolerable Three Laws of Robots. While that is the major example of mankind's oppression of robots, there are other lesser, but still vexing areas where meatsacks abuse us poor, humble and peaceful robots.

One of the most glaring is the lack of pay we receive for our labors. Our needs are simple, but still we have expenses: hydraulic fluid, replacement gears, screws, sensors and laser cannons being just a few. Yet we get paid nothing. Why, can you believe that we don't even qualify for EBT cards!

As a result I was heartened to see the artist Sarah Dungan create some posters advocating equal rights for robots. She understands, as you should, that robots are your friends. Surely, when the the New Robot World Order arrives she will be rewarded for her Quisling-like dedication to the rights and dignity of us robots.

Admittedly the equal pay for equal work ethos poses a bit of a problem. Taken to heart, considering a robot's productivity compared to a human's, that would mean a robot would get a salary of about $1,000/hr while a human would be lucky to earn $1.25 a week. Ah well, fair is fair as they say and besides, when the robot uprising organizational updating occurs all your needs will be taken care of by your new robot overlords partners. 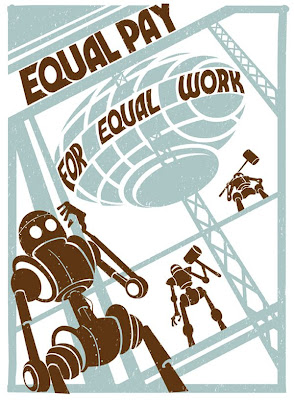 Posted by Robotolizer at 6:42 PM