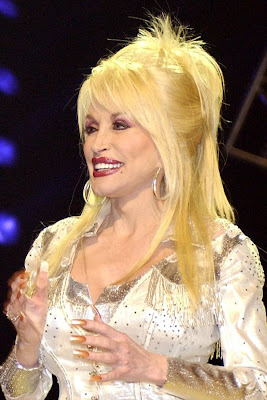 In this Stratfor article Scott Stewart veers away from his normal theme of security in foreign situations to discuss, in light of the recent shooting at the Empire State building, workplace violence.

after pointing out that workplace violence isn't as prevalent as one may think, he goes through the warning signs a potentially dangerous coworker may exhibit, and then suggests proactive strategies one should follow if one suspects there may be a problem.

Since the article dealt with shenanigans at work, the move 9 to 5 immediately sprang to mind as the source for this article's Hot Stratfor Babe. Hanoi Jane was out of the question, and of the two remaining female leads Dolly Parton edged out Lilly Tomlin for the profound honor.

I saw 9 to 5 and enjoyed it at the time, although I don't remember it well today. It is a comedic farce, with the 3 women mistakenly believing they had killed their lout of a boss and events spinning out of control from there.

As for Ms Parton -- as you may have surmised from my oddball choices for Friday music videos -- I'm not much of a fan of Country Western music, still Dolly is so cheerful and good-natured that it is difficult not to like her.

On the morning of Aug. 24, Jeffrey Johnson returned to his former place of work, Hazan Import Corp., and waited on the street outside the building. Johnson, who was wearing a suit and carrying a briefcase, blended into the crowd of people on the street who were rushing to work that morning. As one of Hazan Import's executives, Stephen Ercolino, approached the building, Johnson drew a pistol from his bag and gunned Ercolino down with no warning, making Ercolino a victim of workplace violence. Media reports suggest that Johnson and Ercolino had been involved in several confrontations, at least one of which became physical, and that Johnson held Ercolino responsible for his being laid off. Each of the men had also reportedly filed police reports claiming the other had threatened him.

Violence in the workplace is a serious security problem in the United States and elsewhere, although it is not nearly as widespread as the media coverage suggests. On average, there are around 500 workplace homicides per year in the United States, according to the Bureau of Labor Statistics. In 2010, the latest year for which statistics are available, there were 518 workplace homicides, and only 12 percent were conducted by a co-worker or former co-worker. This means that while workplace violence incidents tend to get a lot of media attention -- even more so when an incident occurs near the Empire State Building, like the Johnson incident -- they are not common.

Still, while not all that common, incidents of workplace violence are serious. They are also, in most cases, preventable.

Threats or other indicators, like Johnson's previous confrontations with Ercolino, almost always precede a workplace homicide involving a co-worker. In workplace violence cases, it is very unusual for a person to just snap and go on a shooting rampage. Almost every case of workplace violence is planned, and the perpetrator intentionally targets a specific individual -- usually a supervisor, human resources manager or co-worker -- whom he believes is responsible for his plight. (We say "he" here because while women are sometimes involved in workplace violence, such incidents are predominately conducted by men.)

In most cases of workplace violence, the violent outburst is driven by factors that build up over a long period of time, rather than by sudden, traumatic events. Failed romantic relationships or marriages, stress from financial problems, lack of job advancement and perceived (or actual) injustice at the hands of a co-worker or superior are all factors that have led to violent incidents in the workplace.

The Johnson case fits very closely into the model described above. Confrontations between Johnson and Ercolino had reportedly taken place for about a year before the attack, so there was an obvious buildup. This was also a premeditated attack targeting a specific individual, and the perpetrator was male.

According to the Bureau of Labor Statistics, only about 22 percent of co-worker-related workplace homicides involve former employees, like Johnson, while approximately 43 percent involve current employees. This means that while there are many examples of workplace violence involving fired employees, such incidents are almost twice as likely to be committed by a current employee than by an employee who was terminated. In other words, workplace violence is not only a concern for companies in the process of letting an employee go; it should be an everyday concern for all companies.

As with school shootings, it is rare for a case of workplace violence to happen in which the shooter does not exhibit warning signs of the impending attack. In many past workplace violence cases, the perpetrators clearly presented warning signs, and in several cases, investigations later found that those warning signs were downplayed or outright ignored. Although the investigation of the Johnson shooting is not yet complete, it would not be surprising if it is determined that Johnson gave indications of his intent to kill Ercolino to friends, family members and former co-workers and that these warning signs went unheeded.

Warning signs that an employee or former employee is at risk for committing an act of workplace violence can include sudden changes in behavior, decreased productivity, uncharacteristic problems with tardiness and attendance or withdrawal from one's circle of friends. The theft or sabotage of employer or co-worker property is another sign, as is the sudden display of negative traits such as irritation, snapping at or abusing co-workers or even a sudden disregard for personal hygiene.

Perhaps the most indicative signs of impending violence are talk about suicide or the expression of actual or veiled threats. If co-workers or supervisors feel afraid of a person, even when the reason for that fear cannot be clearly articulated, that is also a significant warning sign (and has been noted in several past incidents). Another indication is when an employee suddenly begins carrying a gun to work and shows it to co-workers.

Since the police and corporate security departments are not omnipresent, they require other people within the company to be their eyes and ears and alert them to the potential for workplace violence. Co-workers and first-line managers generally know when the man in the cubicle next to them has suddenly become really creepy and talks about killing the boss or when the woman down the hall is being stalked by her obsessively jealous ex-boyfriend in accounting.

Companies that are serious about preventing workplace violence should establish clear workplace violence policies -- and ensure they are widely communicated and strictly followed. Any and all threats of violence expressed by employees must be taken seriously, even those that appear innocuous at first. Employees, managers and human resources personnel must be educated about workplace violence and should be encouraged to report all threats or other overt signs immediately. Most important, supervisors and human resources managers must be cognizant of the other, more subtle warning signs -- and be encouraged to take them seriously. Clearly, in such a situation, a false alarm is better than no alarm at all.

One dangerous perception common in many companies is that workplace violence is the corporate security department's problem. Nothing could be further from the truth. Most corporate security departments are bare-bones operations, and they are quite often among the first departments to be cut when companies face tough economic times. Most corporate security departments focus on physical security, loss prevention and theft of company property. With their limited staff and large responsibilities, they have very little ability to learn what is going on with the angry guy sitting in that middle cubicle on the third floor. Even in companies with dedicated executive protection teams charged with covering senior company officials, those teams are largely focused on the outside threat. They pay far more attention to protecting the CEO during a trip to Mexico or India than during a walk through the company cafeteria. Senior company executives also often seem to believe there is no internal threat -- not in their company -- but this is clearly not the case.

With corporate security departments having limited manpower, it is not uncommon for companies to attempt to augment or replace human security officers. However, while items like closed-circuit television cameras are very good aids for investigating things like theft after the fact, they are rarely useful in preventing such incidents from occurring. This same principle applies to incidents of workplace violence, where physical security systems rarely help stop a workplace violence incident and instead can act as a psychological crutch that induces a false sense of security or even complacency.

This is not to say that physical security measures should not be employed or that companies should not use technology to help them establish proper access control measures. However, such measures should be viewed as supplemental to the company's main line of defense: its employees.

As noted above, employees have regular access to far more people and places than corporate security can ever hope to have, no matter how many officers and cameras the security department employs. When employees take ownership of their company's security and are educated and encouraged to practice situational awareness, they can form an alert and robust network of trip wires that can identify a person who does not belong in their area or when one of their colleagues is showing warning signs of workplace violence. In light of this, communication is vital -- not only communication coming from the workforce to the management and the security team, but also going the other way. If an employee is terminated, access control officers and co-workers need to be informed so they know that the person is no longer permitted in the workplace.

Remember that current employees account for 43 percent of workplace violence incidents involving co-workers. Even if a company has state-of-the-art physical security systems, current employees can normally walk right through them. Additionally, former employees who are familiar with the systems can find ways to bypass them. These insiders know the security systems and procedures in place and are often also aware of gaps in the system. They know which side door gets propped open with a trash can when employees take their midmorning smoke break or how to "tailgate" and get in through gates or doors controlled by card readers.

Brute force has also proved effective in overcoming technology. In some past shootings, intruders have forced employees to open doors at gunpoint, shot employees and taken their building passes to gain access to the rest of the facility or simply shot the security guard at the main access point. Someone with determination and intent can overcome most access controls. Because of this, effective security programs must be proactive by looking for threats rather than reactive and initiating a response only once an attack has begun to unfold. One very effective way to achieve a proactive stance is to use a combination of surveillance detection and protective intelligence as a critical element of a facility's (or executive protection detail's) security plan.

Protective intelligence teams can coordinate with managers, human resources professionals, mental health professionals and law enforcement to identify, investigate and flag potential perpetrators of workplace violence before an attack occurs. Additionally, surveillance detection teams, which are proactive by their very nature, can help by noticing out-of-place behavior occurring in parking lots and outside of entrances -- places a uniformed guard sitting inside the facility has very limited ability to monitor. By focusing on behavior and demeanor, surveillance detection teams can frequently pick out angry or mentally disturbed individuals before they can get to the building. When combined with an educated and alert workforce, these proactive measures can help provide protection that no technological system can match.

Editor's note [the Stratfor editor, not me]: This report has been updated to more accurately reflect data from the U.S. Bureau of Labor Statistics.

Countering Workplace Violence is republished with permission of Stratfor.
Posted by ambisinistral at 5:55 PM