With the Olympics grinding on a recurring topic of articles has been strange old sports that have been dropped from the games. One old sport that is almost always mentioned is Olympic dueling which was a part of the 1908 games.

Each time I would read about it I would wonder how such a contest would be staged. Finally, in the OObject article 12 absurd olympic events I stumbled across a picture of a competitive dueler with a link explaining the sport -- albeit in a confusing and contradictory manner.

Digging around further I found that the sport was briefly popular in the early 20th century, particularly in France. The duelists fired wax bullets at each other. Because a wax bullet hits harder than a modern paintball, they wore heave canvas clothes and steel helmets with thick glass visors.

It sound like a great sport to me. I say it is time the Olympics drop such frivolities as gymnastics and bring back Wax Bullet Dueling. While we're at it, the above linked OObject article mentions the 1900 sport of cannon firing. How in the heck did that ever get dropped from the games?

By the way, wax bullets are still used in fast draw and trick shooting, as well as in some military training exercises. 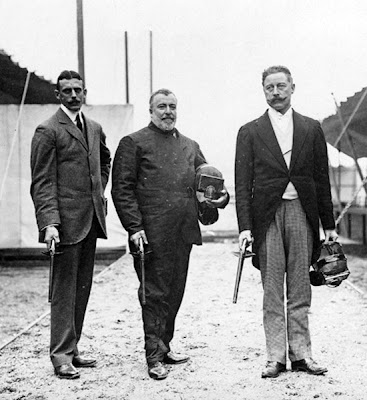 ADDED: I mentioned above that the Olympic dueling was described in a confusing manner. This is because ofentimes the 1906 and 1912 Intercallated Games are referenced instead of the Olympics. From descriptions, in those games the duelists shot at dummies and not each other.

Curiously, the above photo is often used to illustrate dueling at the Intercallated Games, which doesn't seem right because you can clearly see the duelists holding their protective head gear as well as the guards on their pistols to protect their hands.

That said, the Wikipedia page for the 1908 Olympics doesn't mention dueling, so I guess it didn't really make the actual Olympics and the duelists shown above were from some other wax bullet dueling match and not the Intercallated Games.

Posted by ambisinistral at 4:53 PM