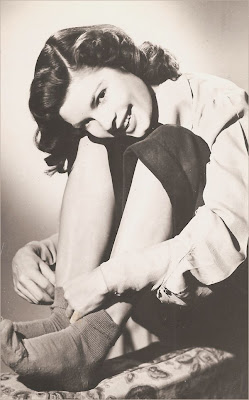 In this Stratfor article Scott Stewart views the Fast and Furious scandal attempts to, while ignoring the domestic political fallout, discuss only the effect it has had on U.S. law enforcement procedure regarding arms smuggling.

I'm not sure Scott is entirely successful in attempting that approach, but his details of how arms interdiction is now being done are an under reported facet of the story.

The beginning of his article is excerpted below, with a link to the full article at the end of the excerpt.

For the Hot Stratfor Babe the 1958 movie The Gun Runners naturally sprang to mind. Its about a dodgy group smuggling arms to Castro's revolutionaries rather than Mexican drug cartels, but as long as guns are being smuggled that's close for me, so the film's female lead, Patricia Owens gets the honors.

Ms Owens had a long and successful career, first in the moveis and then on TV. While she may have considered starring opposite of Marlon Brando in Sayonara the highpoint of her career, I'm sure you'll agree with me that her appearing with Vincent Price in The Fly was really the apex.

As a curious footnote to her biography, her father Arther Owens was a German spy in WWII who ended up getting turned and working as a double agent for the British. You can read about that in the Telegraph article: Britain’s first double agent: the spy who tricked us all. Needless to say, Patricia went through great pains to keep that story a secret lest it torpedo her Hollywood career.


The Other Consequences of Fast and Furious
By Scott Stewart, July 12, 2012

On the night of Dec. 14, 2010, U.S. Border Patrol agent Brian Terry was shot and killed while on patrol in an Arizona canyon near the U.S.-Mexico border. Two guns found at the scene were linked to an investigation being run by the U.S. Bureau of Alcohol, Tobacco, Firearms and Explosives (ATF) called "Operation Fast and Furious," sparking a congressional inquiry into the program and generating considerable criticism of the ATF and the Obama administration. Because of this criticism, in August 2011 ATF acting director Kenneth Melson was reassigned from his post and the U.S. attorney for Arizona was forced to resign.

Currently, the congressional inquiry is focused on U.S. Attorney General Eric Holder, who has been accused of misleading Congress about what he knew about Fast and Furious and when he learned it. The Obama administration has invoked executive privilege to block the release of some of the Department of Justice emails and memos sought by Congress pertaining to the operation. The controversy escalated June 28 when the U.S. House of Representatives voted to hold Holder in contempt of Congress for ignoring its subpoenas.

As all Second Amendment issues are political hot buttons, and with this being a presidential election year in the United States, the political wrangling over Fast and Furious is certain to increase in the coming months. The debate is also sure to become increasingly partisan and pointed. But, frankly, this political wrangling is not what we find to be the most interesting aspect of the operation's fallout. Rather, we are more interested in the way that criticism of Fast and Furious has altered law enforcement efforts to stem the flow of guns from the United States to Mexico and the way these changes will influence how Mexican cartels acquire weapons.

Several of these law enforcement changes already have been enacted. For example, the number of ATF inspectors has been increased due to additional funding for an inspection program through the U.S. Southwest Border Initiative. This means that there are more inspectors to audit the sales records of licensed gun dealers. In southern Arizona, for example, the number of inspectors was increased from three to eight. According to the ATF, these inspectors oversee the operations of some 430 federally licensed firearms dealers in six border counties.

These firearms dealers include gun store proprietors as well as independent dealers working the gun show circuit. The increase in ATF inspection staff and activity has sparked an outcry from gun show dealers who claim they are being unfairly harassed by inspectors. ATF sources have told Stratfor that they do not harass dealers, but that the staff increase has allowed the bureau to catch up on inspections it was not able to conduct in the past. The sources also said they believe that their increased presence at gun shows is scaring away cartel buyers, although, obviously, some gun show firearms are still finding their way into cartel hands.

Another procedural change occurred in August 2011, when the ATF began a new program in which licensed gun dealers in Texas, New Mexico, Arizona and California are required to report to the ATF bulk sales of certain types of rifles, namely semi-automatic rifles larger than .22 caliber with detachable magazines such as the semi-automatic AR-15 and AK-47 variants favored by the cartels. The new rule requires gun dealers to report people without federal firearms licenses who buy two or more of such rifles to the ATF within five working days. The rule has raised the ire of some Second Amendment activists, but the ATF notes that it has had a similar reporting regimen for multiple sales of handguns in place since 1975.

The attention that Fast and Furious attracted to the gun smuggling problem also has led to an increase in interdiction efforts by other U.S. federal, state and local law enforcement agencies, including Immigration and Customs Enforcement. Furthermore, weapons cases have reportedly been given increased prosecutorial priority by U.S. attorneys -- meaning they are now less likely to decline prosecution of a gun case than before the controversy emerged. This has led to increased pressure on lower-level violators such as straw purchasers -- people paid by arms traffickers to buy guns from dealers. Greed will ensure that people continue to work as straw purchasers, but considering the increased risk of prosecution and the new reporting requirements, straw purchasers and the traffickers who employ them will be more exposed.

In May 2012, the ATF claimed that the reporting requirements have led to a decrease in large-volume sales of semi-automatic rifles (10 or more in a single purchase). The ATF also said that traffickers are adapting their weapons procurement methods to the new regulations.

Despite their impact, the law enforcement and reporting changes cannot stem the tide of weapons entirely. In the same way that drug flows adapt to law enforcement interdiction efforts, weapons flows will also adjust. Previous federal investigations have shown that Mexican cartels have contacts in many different parts of the United States, including cities such as Chicago and Atlanta, far from the border. One way to bypass the increase in ATF inspections and the border state reporting requirements is to buy guns in states located farther from the border. Of course, this would require the weapons to be transported longer distances to get to Mexico, increasing transportation costs as well as exposure to interdiction efforts. A shift in the points of purchase would also almost certainly result in the expansion of the new reporting requirements to other states.

Although it will never be possible to completely cut off the flow of guns to Mexico from the United States, it can be reduced. This would force the cartels to search for new sources of weapons.

Read more: The Other Consequences of Fast and Furious | Stratfor

Posted by ambisinistral at 6:45 PM