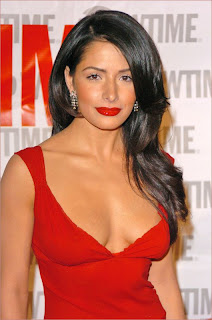 In this Stratfor article Reva Bhalla discusses the current U.S. efforts at imposing sanctions against buying Iranian oil and the concurrent negotiations between the two countries.

He points out that there is a certain element of diplomatic theater in the sanctions. Iran can evade them through its use of cutouts and shell companies, and besides the U.S. has granted a large number of waivers to them.

As for his comments about negotiations, I'm a bit confused by what he's driving at since there are no bilateral negotiations between the two countries. I assmue he means back channel negotiations, although he really only seems to lay out the red lines of the two governments. And of course all of this is complicated by the upcoming Presidential elections.

The beginning of his article is excerpted below, with a link to the entire article at the end of the excerpt.

For the article's Hot Stratfor Babe I wanted to select a woman that bridged the gap between America and Iran. Using my encyclopedic knowledge of Iranian actresses, with a small assist from Google, it was immediately obvious that Sarah Shahi was the obvious choice for the honor.

Ms Shahi was born in Texas of an Iranian father who had left Iran just prior to its revolution. Her mother was Spanish. She's the great-great grand daughter of  Fat′h-Ali Shah Qajar who ruled Iran in the early 19th century.

She started her public career as a Dallas Cowboy Cheerleader before moving to Hollywood and beginning her acting career. Since then she's acted extensively in television, working her way from guest appearances and supporting roles to the starring spot in the series Life and Fairly Legal.


Negotiations Behind U.S. Sanctions Against Iran
By Reva Bhalla, July 3, 2012

Over the past week, the latest phase of U.S.-led sanctions against Iran has dominated the media. For months, the United States has pressured countries to curtail their imports of Iranian crude oil and is now threatening to penalize banks that participate in oil deals with Iran. In keeping with the U.S. sanctions campaign, the European Union on July 1 implemented an oil embargo against Iran. The bloc already has begun banning European countries from reinsuring tankers carrying Iranian oil.

On the surface, the sanctions appear tantamount to the United States and its allies serving an economic death sentence to the Iranian regime. Indeed, sanctions lobbyists and journalists have painted a dire picture of hyperinflation and plummeting oil revenues. They argue that sanctions are depriving Tehran of resources that otherwise would be allocated to Iran's nuclear weapons program. This narrative also tells of the Iranian regime's fear of economically frustrated youths daring to revive the Green Movement to pressure the regime at its weakest point.

But Iran's response to sanctions deadlines has been relatively nonchalant. Contrary to the sanctions lobbyist narrative, this response does not suggest Iran will halt its crude oil shipments, nor does it portend a popular uprising in the streets of Tehran. Instead, it suggests that sanctions are likely a sideshow to a much more serious negotiation in play.

Loopholes in the Sanctions Campaign

The sanctions applied thus far certainly have complicated Iran's day-to-day business operations. However, Iran is well versed in deception tactics to allow itself and its clients to evade sanctions and thus dampen the effects of the U.S. campaign.

One way in which Iran circumvents sanctions is through a network of front companies that enable Iranian merchants to trade under false flags. To enter ports, merchant ships are required to sail under a flag provided by national ship registries. Tax havens, such as Malta, Cyprus, the Bahamas, Hong Kong, the Seychelles, Singapore and the Isle of Man, profit from selling flags and company registries to businesses looking to evade the taxes and regulations of their home countries. Iranian businessmen rely heavily on these havens to switch out flags, names, registered owners and agents, and addresses of owners and agents.

The U.S. Treasury Department has become more adept at identifying these firms, but a government bureaucracy simply cannot compete with the rapid pace at which shell corporations are made. Several new companies operating under different names and flags can be created in the time it takes a single sanctions lawsuit to be drawn up.

Many of Iran's clients turn a blind eye to these shell practices to maintain their crude oil supply at steep discounts. Notably, the past few months have been rife with reports of countries cutting their Iranian oil imports under pressure from the United States. However, after factoring in the amount of crude insured and traded via shell companies, the shift in trade patterns is likely not as stark as the reports present.

The United States already has exempted China, Singapore, India, Turkey, Japan, Malaysia, South Africa, South Korea, Sri Lanka, Taiwan and the 27 members of the European Union from the sanctions. Many of these countries imported higher than average quantities of Iranian crude in the months leading up to their announcements that they had cut down their supply of Iranian crude. China, South Korea, India and Japan also are finding ways to provide sovereign guarantees in lieu of maritime insurance to get around the latest round of sanctions. Even though many of these countries claim to have reduced their oil imports from Iran to negotiate an exemption, falsely flagged tankers carrying Iranian crude likely compensate for much of Iran's officially reduced trade.

Posted by ambisinistral at 5:46 PM

Reva Bhalla is female. You should have used her picture instead.