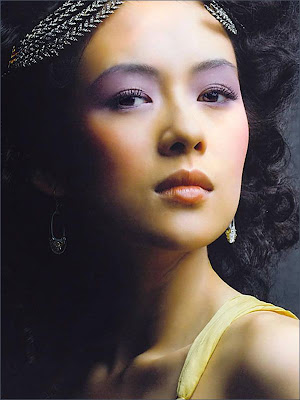 This is an excellent article by Rodger Baker and Zhixing Zhang on China's posture regarding its claims to a huge chunk of the South China Sea.

After a historical overview of China's limited ambitions, they discuss how its claims to the South China Sea arose from earlier claims made by the previous Kuomintang government and never seriously taken by the international community.

For a long time China tried to obscure the significance of its claims via one-on-one diplomacy. However, with the growth of her navy and strategic ambitions, China's claims are now alarming her neighbors and uniting them.

The beginning of the article is excerpted below, with a link to the full article at the end of the excerpt.

The choice for the article's Hot Stratfor Babe was tragic this week. Originally I meant to go with Isabella Wong, the female lead in Jackie Chan's vastly entertaining movie Project A. The movie was a natural choice since it dealt with Jackie fighting pirates off the coast of Hong Kong. Alas, there were no good pictures of Ms Wong, and so she was robbed of the coveted honor.

In her place, after careful deliberation and with a heavy heart for Isabella's misfortunes, I selected the Chinese actress Zhang Ziyi as the article's replacement Hot Stratfor Babe. Ms Ziyi is well known to American audiences for her roles in Crouching Tiger, Hidden Dragon.

Supplanting Isabella Wong as a Hot Stratfor Babe isn't the only scandal she's been involved in, she's also recently been accused of prostituting herself with Chines officials (the original rumors were that the official was the recently disgraced Bo Xilai) to the tune of $100 million. She's denied the rumors and has sued the newspaper that first published them.


The Paradox of China's Naval Strategy
By Rodger Baker and Zhixing Zhang, July 17, 2012

Over the past decade, the South China Sea has become one of the most volatile flashpoints in East Asia. China, Vietnam, the Philippines, Malaysia, Brunei and Taiwan each assert sovereignty over part or all of the sea, and these overlapping claims have led to diplomatic and even military standoffs in recent years.

Because the sea hosts numerous island chains, is rich in mineral and energy resources and has nearly a third of the world's maritime shipping pass through its waters, its strategic value to these countries is obvious. For China, however, control over the South China Sea is more than just a practical matter and goes to the center of Beijing's foreign policy dilemma: how to assert its historic maritime claims while maintaining the non-confrontational foreign policy established by former Chinese leader Deng Xiaoping in 1980.

China staked its modern claim to control of the sea in the waning days of the Chinese Civil War. Since most of the other claimant countries were occupied with their own independence movements in the ensuing decades, China had to do little to secure this claim. However, with other countries building up their maritime forces, pursuing new relationships and taking a more active stance in exploring and patrolling the waters, and with the Chinese public hostile to any real or perceived territorial concessions on Beijing's part, Deng's quiet approach is no longer an option.

China is a vast continental power, but it also controls a long coastline, stretching at one time from the Sea of Japan in the northeast to the Gulf of Tonkin in the south. Despite this extensive coastline, China's focus has nearly always turned inward, with only sporadic efforts put toward seafaring and even then only during times of relative security on land.

Traditionally, the biggest threats to China were not from sea, except for occasional piracy, but rather from internal competition and nomadic forces to the north and west. China's geographic challenges encouraged a family-based, insular, agricultural economy, one with a strong hierarchal power structure designed in part to mitigate the constant challenges from warlords and regional divisions. Much of China's trade with the world was undertaken via land routes or carried out by Arabs and other foreign merchants at select coastal locations. In general, the Chinese chose to concentrate on the stability of the population and land borders over potential opportunities from maritime trade or exploration, particularly since sustained foreign contact could bring as much trouble as benefit.

Two factors contributed to China's experiments with naval development: a shift in warfare from northern to southern China and periods of relative national stability. During the Song dynasty (960-1279), the counterpart to the horse armies of the northern plains was a large inland naval force in the riverine and marshy south. The shift to river navies also spread to the coast, and the Song rulers encouraged coastal navigation and maritime trade by the Chinese, replacing the foreign traders along the coast. While still predominately inward-looking during the Yuan dynasty (1271-1368) under the Mongols, China carried out at least two major naval expeditions in the late 13th century -- against Japan and Java -- both of which ultimately proved unsuccessful. Their failure contributed to China's decision to again turn away from the sea. The final major maritime adventure occurred in the early Ming dynasty (1368-1644), when Chinese Muslim explorer Zheng He undertook his famous seven voyages, reaching as far as Africa but failing to use this opportunity to permanently establish Chinese power abroad.

Zheng He's treasure fleet was scuttled as the Ming saw rising problems at home, including piracy off the coast, and China once again looked inward. At about the same time that Magellan started his global expedition in the early 1500s, the Chinese resumed their isolationist policy, limiting trade and communication with the outside and ending most consideration of maritime adventure. China's naval focus shifted to coastal defense rather than power projection. The arrival of European gunboats in the 19th century thoroughly shook the conventional maritime logic of Chinese authorities, and only belatedly did they undertake a naval program based on Western technology.

Even this proved less than fully integrated into China's broader strategic thinking. The lack of maritime awareness contributed to the Qing government's decision to cede its crucial port access at the mouth of the Tumen River to Russia in 1858, permanently closing off access to the Sea of Japan from the northeast. Less than 40 years later, despite building one of the largest regional fleets, the Chinese navy was smashed by the newly emergent Japanese navy. For nearly a century thereafter, the Chinese again focused almost exclusively on the land, with naval forces taking a purely coastal defense role. Since the 1990s, this policy has slowly shifted as China's economic interconnectedness with the world expanded. For China to secure its economic strength and parlay that into stronger global influence, the development of a more proactive naval strategy became imperative.

To understand China's present-day maritime logic and its territorial disputes with its neighbors, it is necessary to first understand the so-called nine-dash line, a loose boundary line demarcating China's maritime claims in the South China Sea.

The nine-dash line was based on an earlier territorial claim known as the eleven-dash line, drawn up in 1947 by the then-ruling Kuomintang government without much strategic consideration since the regime was busy dealing with the aftermath of the Japanese occupation of China and the ongoing civil war with the Communists. After the end of the Japanese occupation, the Kuomintang government sent naval officers and survey teams through the South China Sea to map the various islands and islets. The Internal Affairs Ministry published a map with an eleven-dash line enclosing most of the South China Sea far from China's shores. This map, despite its lack of specific coordinates, became the foundation of China's modern claims, and following the 1949 founding of the People's Republic of China, the map was adopted by the new government in Beijing. In 1953, perhaps as a way to mitigate conflict with neighboring Vietnam, the current nine-dash line emerged when Beijing eliminated two of the dashes.

[Nine-Dash Line map at The Paradox of China's Naval Strategy]

The new Chinese map was met with little resistance or complaint by neighboring countries, many of which were then focused on their own national independence movements. Beijing interpreted this silence as acquiescence by the neighbors and the international community, and then stayed largely quiet on the issue to avoid drawing challenges. Beijing has shied away from officially claiming the line itself as an inviolable border, and it is not internationally recognized, though China regards the nine-dash line as the historic basis for its maritime claims.

Like other claimant countries such as Vietnam and the Philippines, China's long-term goal is to use its growing naval capabilities to control the islands and islets within the South China Sea and thus the natural resources and the strategic position they afford. When China was militarily weak, it supported the concept of putting aside sovereignty concerns and carrying out joint development, aiming to reduce the potential conflicts from overlapping claims while buying time for its own naval development. Meanwhile, to avoid dealing with a unified bloc of counterclaimants, Beijing adopted a one-to-one negotiation approach with individual countries on their own territorial claims, without the need to jeopardize its entire nine-dash line claim. This allowed Beijing to remain the dominant partner in bilateral negotiations, something it feared it would lose in a more multilateral forum.

Posted by ambisinistral at 6:25 PM