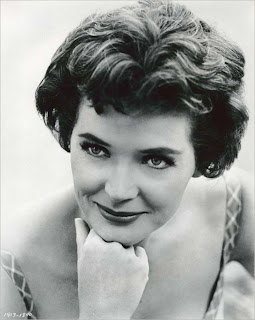 In this Stratfor article George Friedman begins by discussing the constraints, domestic and international, that Presidents face in freely implementing their foreign policies.

He then reviews, in broad strokes, what he thinks of each of the candidates hopes to accomplish in the foreign policy arena.

I'll present the article without my usual comments about it. You can read an excerpt of the beginning of the article below, with a link to the full article at the end of the excerpt.

For the article's Hot Stratfor Babe I naturally turned towards actresses who had played the role of President on the silver screen. After examining the field I selected Polly Bergen for her role as Madame President in the 1964 film Kisses for my President.

The movies starts with the women of America banding together and voting one of their own, Ms Bergen as Leslie McCloud, into the Presidential Office. This creates all manner of complications. As she deals with an ornery Senator and a South American dictator, her husband Thad, played by Fred MacMurray, has to comically deal with his fish out of water role as the Nation's First Gent. Ho-ho-ho, the hilarity that ensues as he attends garden parties and what-not.

Meanwhile her two kids are running amuck, with her daughter dating some scoundrel while her son uses his Secret Service detail to bully the kids and teachers at his school.

Of course such domestic chaos is not seemly, but it all resolves itself when Madame President gets knocked-up and decides to resign so's she can tend to her family, like a house wife should. Sounds like a reasonable conclusion to me.

Hmmm... if he could get himself preggers it would be two more historic firsts for Obama -- first pregnant male and first President to resign because he had a bun in the oven. Do it Barry, do it!


The Election, the Presidency and Foreign Policy
By George Friedman, July 31, 2012

The American presidency is designed to disappoint. Each candidate must promise things that are beyond his power to deliver. No candidate could expect to be elected by emphasizing how little power the office actually has and how voters should therefore expect little from him. So candidates promise great, transformative programs. What the winner actually can deliver depends upon what other institutions, nations and reality will allow him. Though the gap between promises and realities destroys immodest candidates, from the founding fathers' point of view, it protects the republic. They distrusted government in general and the office of the president in particular.

Congress, the Supreme Court and the Federal Reserve Board all circumscribe the president's power over domestic life. This and the authority of the states greatly limit the president's power, just as the country's founders intended. To achieve anything substantial, the president must create a coalition of political interests to shape decision-making in other branches of the government. Yet at the same time -- and this is the main paradox of American political culture -- the presidency is seen as a decisive institution and the person holding that office is seen as being of overriding importance.
Constraints in the Foreign Policy Arena

The president has somewhat more authority in foreign policy, but only marginally so. He is trapped by public opinion, congressional intrusion, and above all, by the realities of geopolitics. Thus, while during his 2000 presidential campaign George W. Bush argued vehemently against nation-building, once in office, he did just that (with precisely the consequences he had warned of on the campaign trail). And regardless of how he modeled his foreign policy during his first campaign, the 9/11 attacks defined his presidency.

Similarly, Barack Obama campaigned on a promise to redefine America's relationship with both Europe and the Islamic world. Neither happened. It has been widely and properly noted how little Obama's foreign policy in action has differed from George W. Bush's. It was not that Obama didn't intend to have a different foreign policy, but simply that what the president wants and what actually happens are very different things.

The power often ascribed to the U.S. presidency is overblown. But even so, people -- including leaders -- all over the world still take that power very seriously. They want to believe that someone is in control of what is happening. The thought that no one can control something as vast and complex as a country or the world is a frightening thought. Conspiracy theories offer this comfort, too, since they assume that while evil may govern the world, at least the world is governed. There is, of course, an alternative viewpoint, namely that while no one actually is in charge, the world is still predictable as long as you understand the impersonal forces guiding it. This is an uncomfortable and unacceptable notion to those who would make a difference in the world. For such people, the presidential race -- like political disputes the world over -- is of great significance.

Ultimately, the president does not have the power to transform U.S. foreign policy. Instead, American interests, the structure of the world and the limits of power determine foreign policy.

In the broadest sense, current U.S. foreign policy has been in place for about a century. During that period, the United States has sought to balance and rebalance the international system to contain potential threats in the Eastern Hemisphere, which has been torn by wars. The Western Hemisphere in general, and North America in particular, has not. No president could afford to risk allowing conflict to come to North America.

At one level, presidents do count: The strategy they pursue keeping the Western Hemisphere conflict-free matters. During World War I, the United States intervened after the Germans began to threaten Atlantic sea-lanes and just weeks after the fall of the czar. At this point in the war, the European system seemed about to become unbalanced, with the Germans coming to dominate it. In World War II, the United States followed a similar strategy, allowing the system in both Europe and Asia to become unbalanced before intervening. This was called isolationism, but that is a simplistic description of the strategy of relying on the balance of power to correct itself and only intervening as a last resort.

During the Cold War, the United States adopted the reverse strategy of actively maintaining the balance of power in the Eastern Hemisphere via a process of continual intervention. It should be remembered that American deaths in the Cold War were just under 100,000 (including Vietnam, Korea and lesser conflicts) versus about 116,000 U.S. deaths in World War I, showing that far from being cold, the Cold War was a violent struggle.

The decision to maintain active balancing was a response to a perceived policy failure in World War II. The argument was that prior intervention would have prevented the collapse of the European balance, perhaps blocked Japanese adventurism, and ultimately resulted in fewer deaths than the 400,000 the United States suffered in that conflict. A consensus emerged from World War II that an "internationalist" stance of active balancing was superior to allowing nature to take its course in the hope that the system would balance itself. The Cold War was fought on this strategy.

Between 1948 and the Vietnam War, the consensus held. During the Vietnam era, however, a viewpoint emerged in the Democratic Party that the strategy of active balancing actually destabilized the Eastern Hemisphere, causing unnecessary conflict and thereby alienating other countries. This viewpoint maintained that active balancing increased the likelihood of conflict, caused anti-American coalitions to form, and most important, overstated the risk of an unbalanced system and the consequences of imbalance. Vietnam was held up as an example of excessive balancing.

The counterargument was that while active balancing might generate some conflicts, World War I and World War II showed the consequences of allowing the balance of power to take its course. This viewpoint maintained that failing to engage in active and even violent balancing with the Soviet Union would increase the possibility of conflict on the worst terms possible for the United States. Thus, even in the case of Vietnam, active balancing prevented worse outcomes. The argument between those who want the international system to balance itself and the argument of those who want the United States to actively manage the balance has raged ever since George McGovern ran against Richard Nixon in 1972.

If we carefully examine Obama's statements during the 2008 campaign and his efforts once in office, we see that he has tried to move U.S. foreign policy away from active balancing in favor of allowing regional balances of power to maintain themselves. He did not move suddenly into this policy, as many of his supporters expected he would. Instead, he eased into it, simultaneously increasing U.S. efforts in Afghanistan while disengaging in other areas to the extent that the U.S. political system and global processes would allow.

Obama's efforts to transition away from active balancing of the system have been seen in Europe, where he has made little attempt to stabilize the economic situation, and in the Far East, where apart from limited military repositioning there have been few changes. Syria also highlights his movement toward the strategy of relying on regional balances. The survival of Syrian President Bashar al Assad's regime would unbalance the region, creating a significant Iranian sphere of influence. Obama's strategy has been not to intervene beyond providing limited covert support to the opposition, but rather to allow the regional balance to deal with the problem. Obama has expected the Saudis and Turks to block the Iranians by undermining al Assad, not because the United States asks them to do so but because it is in their interest to do so.

Obama's perspective draws on that of the critics of the Cold War strategy of active balancing, who maintained that without a major Eurasian power threatening hemispheric hegemony, U.S. intervention is more likely to generate anti-American coalitions and precisely the kind of threat the United States feared when it decided to actively balance. In other words, Obama does not believe that the lessons learned from World War I and World War II apply to the current global system, and that as in Syria, the global power should leave managing the regional balance to local powers.

Romney takes the view that active balancing is necessary. In the case of Syria, Romney would argue that by letting the system address the problem, Obama has permitted Iran to probe and retreat without consequences and failed to offer a genuine solution to the core issue. That core issue is that the U.S. withdrawal from Iraq left a vacuum that Iran -- or chaos -- has filled, and that in due course the situation will become so threatening or unstable that the United States will have to intervene. To remedy this, Romney called during his visit to Israel for a decisive solution to the Iran problem, not just for Iran's containment.

Read more: The Election, the Presidency and Foreign Policy | Stratfor

Posted by ambisinistral at 6:13 PM