If you haven't heard, there's a housing bubble on. Speculators are driving up the price of housing, and when prices crash everyone will suffocate under the financial rubble. There are even blogs devoted to it.

So we're all doomed. Just thought I should let you know.

Median home prices (the price of a home a reasonably prosperous family might buy) have historically closely tracked GDP per capita. That makes sense - as people make more, they spend more on housing.

So housing prices today are at historic highs relative to GDP per capita, right? 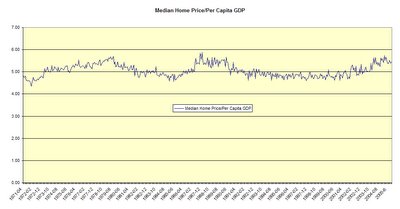 Well, not really. They're above the long run average, but about where they were in the late 70s and late 80s.

And with mortgage rates so low, they're quite affordable. In fact, the median home is as affordable as it has even been. 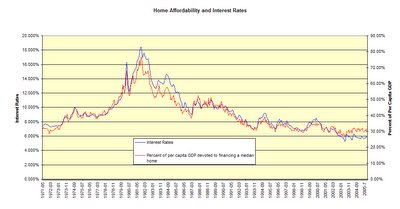 See, home prices are relatively insensitive to mortgage rates, which is why affordability and interest rates track each other so closely. But with rates at historic lows, people appear to be willing to spend a little more to buy a home now and lock in those rates.

But prices will drop, won't they?

Well, they've come down some already, and if mortgage rates rise precipitously, or the economy falls into recession, they might. Between April and September of 1990 prices dropped by 10%, and they didn't recover until the end of 1993. Would that be a disaster?

Now, there may be some markets that are frothy, and maybe high-end homes are going through the roof. But the median home, the one that median people like myself care most about, is well within reach, and looks like a pretty good investment right now - especially if you intend to stay for a while.
Posted by Morgan at 6:31 PM

Good one, Morgan. Paul at Wizbang also posted on the housing market and wondered what effect Katrina had on the November numbers.

Housing market has separated the bulls and the bears more sharply than anything I can remember. Do need a 'soft-landing'--to keep America importing--and i think we'll get it. The 10 yr bond just will not be jawboned up, there's too much demand, and too much liquidity. Key is Dollar strength--it wants to rise (even as gold does--a situation rare enough to put us on 'new' ground wrt the housing mkt). And so long as Dollar holds--and key mature currencies are 'printing their own currencies down' in order to hold their exports up (o us, ergo our need for 'soft-landing'), we'll continue to have a strong Dollar, thus strong foreign demand for treasuries, thus a low rate on long Treasuries, thus low mortgage rates, thus enough demand to get the 'soft landing' in housing.

But WATCH Chuck Shumer's tariff bill--he could throw a terrible wrench in the works if we don't stop him.

“But WATCH Chuck Shumer's tariff bill--he could throw a terrible wrench in the works if we don't stop him.”

The greatest threat to our economy may very well be the Democratic Party and its liberal Republican allies. These folks are economic illiterates. They don’t even understand the basics. We should place our emphasis on helping the economy to grow. “Sharing the wealth” policies guarantee that all of us will remain poorer. Joseph Schumpeter’s doctrine of creative destruction is key to everything.

Schumer is being controlled by union money. It's not that he doesn't know better--geez, staffs of hundreds of lawyers, SOMEONE has to've taken an eco course.

The tariff idea is to retreat from from globalism's low-cost producers, in order to 'protect jobs stateside'. Who can argue, other than folks who've heard of Smoot-Hawley.

In addition to throwing global capital flows and currencies into 'no-confidence', Shumer intends to chastise WalMart into unionizing.

Of course, the pain trickle-down will hurt our most vulnernable the most of all--but what the hell, that can be easily demagogued away.

Justice is launching leak-probe in order to protect national security, and

200 or so Washington State public emplyees are launching a class-action suit against WA state and its public-employees union for their firings as result of a state law which requires firing people who withold union dues (in this case, because the unions use the $ to fund politics with which the fired employees do not agree). Take THAT, Josef Stalin!

Dan Springer at FoxNews is the reporter on the Washington state story.

The lady leading the suit is Debbie Koepp (the # of litigants is up to 300 or so now).

Debbie is a two-time winner of "Employee of the Year" awards in WA civil service, her hub a decorated war vet, her son in the service in Iraq currently.

Her beef is that the automatic-fire law pushed thru by the new governor was *apparently* a quid-pro-quo for a $150,000 campaign contribution from her union to the new governor.

There is some talk of the union's special help in getting the new gov (Christine Gregoire, previously the Democratic Attorney General) the verdict over her opponent--if you remember that contentious election thought by many to've been 'stolen'.

If this bothers you:

Contentious, huh?
Barone or someone said there is some hope for a New Guv on Hewitt yesterday,
...but not if we don't all pitch in against the unions.
Look what happened to Arnold.
He never should have lumped that stuff together:
The Unions went Nuclear.

The hard pols on the left have no sense of shame.

If I were one of them, and contemplating the wreckage of General Motors, I do bleeve I'd have to disguise myself and get outta town permanently.

The CTA (calif teachers) Mortgaged their Damn Taj Mahal HQ to raise dough against Arnold.
...that much more the teachers will have to make up.

The left is about death in so many ways. In this case, adding a whopping marginal cost to the labor component of car-making has, for the sake of the last few generations making a little more cash (much of it earmarked for the union leaders & pols), has taken a company which, because it had the headstart market-share and the production tools & talent, should've been the world leader and should've been creating more and more jobs for future generations, and is instead dead in the water, about to go belly up, having lost 54% of its market cap in 2005 alone. It's beyond destructive, wasteful, and tragic, it's an insult to all Americans.

just go to my link above and look at the table of contents for Washington state's Public-Employee Union bureaucracy. EVERY possible nit-gnawing shred of humanity in the workplace has been assigned Doctrine and Overseers. It's just pornographic, it's about stasis--it's about death.