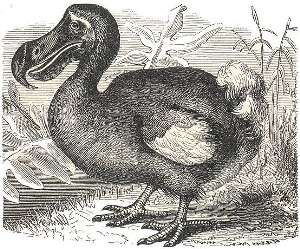 Subtitle this item as 'The Strange Paths you can Follow on the Internet'. It starts with an item in the Australian, via Google News, entitled Dead as Dodo Find. Christmas is a slow news day, and so we're treated to the fact that a cache of some 700 bones has been found on Mauritius. These are a mixture of dodo and chicken bones and scientist believe they'll finally be able to reconstruct a full skeleton of a dodo bird from them.

The fact they don't have a complete skeleton, coupled with the mention in the article that the last stuffed dodo bird was destroyed in a fire in 1755, surprised me. There were thousands of the birds, and the 18th and 19th centuries were full of gentlemen naturalists classifying, stuffing, and mounting every exotic creature they could find. It must have been the speed of their extinction that kept the museum cases empty of samples of them.

Being a slow news day, I search the web for further dodo information. In our imagination dodo birds are exotic hulking creatures doomed by their very innocence. The Mauritius as a Garden of Eden, with lambs laid down next to wolfs, invaded and destroyed by blunberbuss toting Dutch sailors. That image is punctured by National Geographic's Extinct Dodo Related to Pigeons, DNA Shows. So the feathered things were nothing more than gigantic landbound pidgeons? Revealed as giant rats of the bird kingdom, some of the romantic pathos of their extinction drains away.

Continuing on, we find a suitably ridiculous end for our Christmas dodo research. Anyone for Tee shows the dodo is alive in the lexicon of golfers. Sadly, I've shot a dodo on more than one occasion myself. Will PETA ever forgive me?
Posted by ambisinistral at 2:46 PM

I can't see a dodo without thinking of Alice in Wonderland, that is an immortal bird.

Hmm... Pigeons, DNA, a horror story in the making. What did they eat with those beaks, anyway?

poor things. the Euroepans killed them for sport.