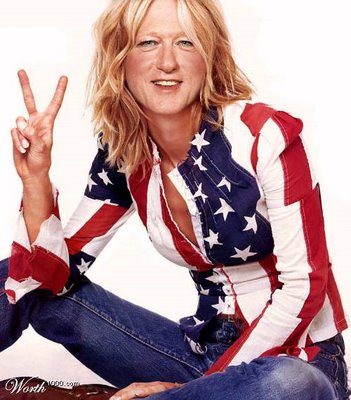 Posted by MeaninglessHotAir at 6:38 PM

Crikey, and right before dinner, too.

Ugg, at least I have a couple of hours before having dinner.

But will she inhale?

She will get my vote. What a babe. Where was she in the 2000 election?

The one and only time I can ever recall being in an American Legion Hall, which was sometime near the 4th of July about 6 or so years ago, there was a young woman wearing a similar but, ummmm...., much better outfit. I have no doubt she'd get more votes.

BTW, is this someone a pop culture ignoramous like me should recognize?

I think that's Bill Clinton's niece. You know, the one who's a vegetarian and a model? Can't remember her name.

Doh!!!! Thanks (he says sheepishly), Morgan.