Appraently, Bush is not the only politician to see his poll numbers decline. We know about Tony Blair, but how much play are the French getting now? The Clearstream scandal is all the rage these days in the land of our moral betters.


It is the search for the person who concocted the list that has turned into an affair of state. According to testimony leaked to Le Monde, a left-leaning newspaper, General Philippe Rondot, a retired top spy, told the inquiry that Dominique de Villepin, then foreign minister and now prime minister, had asked him to investigate Mr Sarkozy—on orders from President Jacques Chirac. Mr de Villepin and Mr Chirac each took the unusual step of issuing a communiqué to deny this claim. Mr de Villepin, already reeling from defeat on the streets over his labour reforms, told a raucous parliament this week that he was “profoundly shocked and hurt” by the “campaign of slander and lies” against him. He flatly ruled out his own resignation. 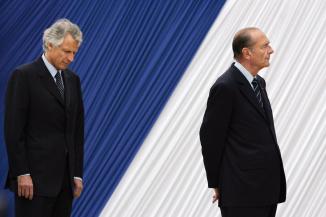 Our friends to the right (well at least in France) are brought to you via LeMonde.
Posted by Barry Dauphin at 2:46 PM

In the words of Frank Zappa:

There is no Hell. There is only France.

OK, so I'll miss Berthillon ice cream on the Ile St. Louis. But that's about it. I'll take Zion National Park any day.

France has usually been governed by prostitutes.

There is nothing lower than the human race except the French.

(Can we have a contest?)

We can stand here like the French, or we can do something about it.

OK. It's going to be that kind of thread.

"I would rather have a German division in front of me than a French one behind me."
---General George S. Patton

And then we have:

They have few sentiments, but they express them neatly; they have little meat, too, but they dress it well.

Q: What do you call a Frenchman advancing on Baghdad?
A: A salesman.

Yes well good old Harry Truman said the French were unreliable and difficult to deal with.