Saturday Mini-Review: Sin City and A Man for All Seasons 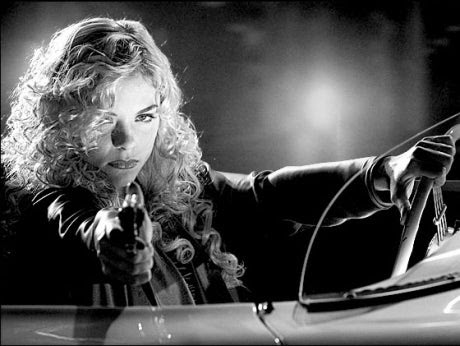 From the first romantic scene, which shocks the viewer with its gratuitous and entirely uncalled-for violence, you are treated—if that is the word—to a long and disjointed sequence of ever more violent and disgusting episodes. None of them are enjoyable and the movie as a whole has nothing in particular to offer. The jury is in: there is no redeeming social value here, this movie is Not Worth Watching. I used to believe that every movie with Bruce Willis had at least some redeeming value. If I'd avoided this I would still harbor that pleasant delusion. Avoid it at all costs.

A Man for All Seasons

Now this is a great, if perhaps a little disingenuous, movie. If your boss flagrantly pursues a path you consider morally wrong, deeply morally wrong, how do you square your conscience? We've all been there, frequently on a daily basis. Much as we would all like to believe ourselves on the side of the angels, honesty dictates that we remember times when we unfortunately chose the path of corruption—after all, it wasn't that important a matter and we wanted to keep our jobs. But so thought many Germans in the Thirties, and we all tell ourselves that we have learned The Big Lesson—never again. But have we? Tell that to the 300,000 dead Iraqis, to the immense piles of Hutu and Tutsi corpses. What are you doing to stop genocide in Darfur today? Despite our fallen natures, sometimes the proper moral choice must be made and we must accept the inevitable consequences: loss of influence, loss of friends, loss of job, loss of life. So it happens to Sir Thomas More, but he remains undaunted and unbowed, though an entire country has caved cravenly to a mildly tyrannical master. Was his resistance and martyrdom worth it? Perhaps. What is certain is that Paul Scofield's performance in this movie is brilliant; watching and once more contemplating this perennial question is well worth the time invested.

Posted by MeaninglessHotAir at 8:00 PM

Sin City I will not watch, but A Man for all Seasons is a wonderful movie, and thought provoking. What would you do? It is of course a question of character.

I saw a show about a saint, I forget his name, an African soldier in the Roman Legion who refused to put the Emporer before his God. And it costs him his life. I wonder how many Christians would do that today?

Every everyday sacrifice is that, in a way--the putting of something larger ahead of an immediate gratification.

A Man For All Seasons has two wonderful scenes that I have remembered since I first saw the movie in 1967, a month or so before I began my Vietnam tour.

The first is where More answers his son-in-law that he would indeed give the Devil himself the benefit of the law, "...for my own safty's sake", since the alternative would be having no law to protect him.

The second is when More acknowledeges to Richard Rich that he partially understands why he has betrayed him, and says to him, "Why Richard, it profits a man nothing to give his soul for the whole world...but for Wales"?

Was it worth it? If people are still moved by the story centuries later, it certainly was. Where would our world be without such models that give us the courage to sometimes say no, and bear the costs? It will be a great day when no more Darfurs can happen; for the time being, I'm relatively confident that no king will ever get the better of me in my country.

Yes, the scene is in which he describes why we must maintain the law, even against the Devil himself, is one of the best and most important ever filmed. And of course it is that attitude which later to some extent forms the basis of his opposition to Henry's forcible expropriation of the Church in England for his own purposes (divorce and otherwise). The treachery of Rich causes the law to go awry, though, more's the pity.

Also, More's love for the law led him to praise the burning of 6 Lutherans as quite proper, a fact which is conveniently omitted in the movie, and one reason why I labelled it "disingenuous". Sometimes the law is an ass.

truepeers, I believe you are right. It is partially the example of the Thomas Mores of this world which has brought us the wonderful system of governance we enjoy in the English-speaking world today. Still, it seems like awfully thin gruel for an entire very praiseworthy life.

But my point is larger: though not a life and death matter, all of us have the unfortunate opportunity to be caught between expediency and order on the one side and morality on the other. The choice is usually neither easy nor clear.

MHA, yes the choice is neither easy nor clear, which is why it usually takes a person of strong faith, or a person so tortured by the confusion that he makes the choice less from moral clear-headedness as from a need to escape mental distress. And then, the newly-minted outsider may find himself with a lot of time to ask what happened and in the process discover that the moral failure behind his choice was widely shared, including by himself.

He learns that there is some necessary, minimal quantum of violence in all decisions, even moral ones (so perhaps he should have had the mental strength to help avoid things coming quite to the point of decision he eventually faced), and that he is now in need of a faith that gives him the courage to act, knowing his choice from now on cannot be simply for the good, but must also be for the lesser of evils.

So much of morality is in deferring decisions: that, I think, is the lesson of Hamlet. The organizational conformist may err in not questioning his leaders' vain decisions. But on the other hand, the would-be moralist can also err in thinking that an absolute choice between going and staying needs to be made now. Sometimes, it must be made; sometimes not, since the lesser evil is often in muddying the waters.

Ultimately it is not the law, but the mysterious ambiguity of that divine power which guarantees the law that must be our insufficient guide. Monotheism properly distinguishes between the moral and ethical as it distinguishes between the laws of God and of men (unlike societies bound by uniquely correct forms of ritualized order in which the ethical choice is the only moral choice).

And, forget clarity--it ain't in the cards. The conflicting allegiances--family, country, self, even (I suppose) God--guarantee a muddle for the humane and humble. Clarity is almost its own negation in that way.

Graphic novels being very much the thing and director Robert Rodriguez doing the unthinkable in defying the Director's Guild to give co-credit to creator Frank Miller being very much within the feel, Sin City was a must for fans of such. For those like myself who live in the refected brilliance (brothers, nephews) it was also a must see so as not to be excuded from certain conversations, but then I would have seen it anyway, because I heard the review that opened thus:

As a film critic, I have often bemoaned the amorality and opportunism of the vigilante genre, as well as the sadism and righteous torture on display in movies and television in the wake of Sept. 11. From time to time, I have also lamented the explosion of the comic-book superhero genre. With the recent exceptions of Spider-Man 2 and The Incredibles, these cookie-cutter action thrillers have been crafted for a generation weaned on Game Boys. Meanwhile, computerized effects have taken cinema farther and farther from the world that human beings actually inhabit. And now comes cinema's latest devolutionary milestone, Sin City (Miramax), a graphic novel come to life, its sets copied from the page and regenerated in three dimensions inside a computer, and boasting the most relentless display of torture and sadism I've encountered in a mainstream movie.

The movie is co-directed by Frank Miller, who created the Sin City graphic novels, and Robert Rodriguez, who gave up his membership in the Directors Guild of America when it told him he couldn't share a credit with someone who'd never directed a film. (What a putz move by the DGA.)

Unlike David Edelstein (Slate3/31/05), I didn't love it (the brothers and nephews did) in that I thought the third episode was both obvious and overlong, but I'd read the source material for the second episode many years earlier and that I thought a technical triumph which also included a great performance from Mickey Rourke, an actor who broke my heart many years ago, in the same way I'd guess Marlon Brando broke the heart of his fans years earlier, by squandering his considerable talent.

A Man For All Seasons is one great actor after another giving one great performance after another in Robert Bolt's stirring play. In addition to Scofield (his prior "bad guy" picture The Train is now, finely, widely available) there is McKern as Cromwell and Hiller as Alice and York as Margaret and John Hurt as he was 40 years ago and Shaw and Welles and that glimpse of Vanessa and then, in addition to all of those great actors and all of those great words, there is that river.

I'm feeling a little better today, though not enough to do links, MHA. Best.

Well, "finely" should be "finally", but otherwise it doesn't look too bad.

"Finely" was an unusually creative typo.

Thanks, buddy. It is almost like it was intentional.

The Train is well worth the investment in time and money for any who haven't seen it.

I remember it--saw it in the theater when it came out--but was too young to remember much more than the trains themselves. Burt Lancaster was the lead, right? WWII drama? Black & White?

I'm glad to see I'm not the only one on earth who hated Sin City. Disgusting violence as pornography for the most cretinous people imaginable. I suspect the people who come up with such stuff have led sheltered lives and never witnessed real violence for it is anything but entertaining.

The quote from David Edelstein of Slate doesn't surprise me. I believe he also loved Kill Bill. But like many critics he was appalled by the violence in The Passion of the Christ. At least the violence in Mel Gibson's film and the suffering that came from it had a point unlike the nauseating tripe of Rodriguez and Tarantino.

That's the one. Scofield plays the Nazi Colonel.

More than just a bit disingenous, Robert Bolt's "A Man For All Seasons" mislabeled Thomas More as a Man of Conscience. Peter Ackroyd, in my opinion, makes that argument utter rubbish in his magnificent Thomas More biography.

More, Ackroyd believes, died not in the defense of his conscience, but as a martyr for his Roman Catholic faith. Signing the Act of Succession, for More, would have been a renunciation of universal Truth and its replacement with the imperfect rule of Man. And Henry was no "mild" tyrant. He was, in fact, a quite accomplished mass murderer, with over 40,000 state-approved executions to his credit.

Bolt, as an atheist, likely didn't place much credence in Thomas More's religious belief as a motive for martyrdom, so the author re-framed the motive as a personal conceit - the direct antithesis of the former lord chancellor's philosophical perspective.