I wish him Luck 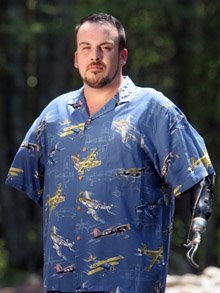 A double-amputee Iraq-war vet is suing Michael Moore for $85 million, claiming the portly peacenik recycled an old interview and used it out of context to make him appear anti-war in "Fahrenheit 9/11."

Sgt. Peter Damon, 33, who strongly supports America's invasion of Iraq, said he never agreed to be in the 2004 movie, which trashes President Bush.

In the 2003 interview, which he did at Walter Reed Army Hospital for NBC News, he discussed only a new painkiller the military was using on wounded vets.

"They took the clip because it was a gut-wrenching scene," Damon said yesterday. "They sandwiched it in. [Moore] was using me as ammunition."

Damon seems to "voice complaint about the war effort" in the movie, according to the lawsuit.

But what the father of two from Middleborough, Mass., was really talking about was the "excruciating" pain he felt after he lost his arms when a Black Hawk helicopter exploded in front of him.

Damon wasn't expressing any opinion about the war, the suit charges, but rather extolling the drug.

"I just want everybody to know what kind of a guy Michael Moore is, and what kind of film this is," said Damon. He has appeared in two films attacking "Fahrenheit" -"Michael Moore Hates America" and "Fahrenhype 9/11."

In "Fahrenheit 9/11," the bandaged National Guardsman is shown laying on a gurney complaining that he feels like he's "being crushed in a vise. But they [the drugs] do a lot to help it and they take a lot of the edge off it."

His image appears seconds after Rep. Jim McDermott (D-Wash.) says, "You know, they say they're not leaving any veterans behind, but they're leaving all kinds of veterans behind."

I also wish Sgt. Damon success with his lawsuit. I suspect, however, that Moore has sheltered his assets. He plays that fast and loose with "facts", makes a lot of money doing so, and has been at it quite a while now. He's probably got plenty of advice about how to shield his money from the people he uses and lies about.

Have you read that book "Do As I Say" by Peter Scweizer?

According to him Moore owns stock in Halliburton along with several other corporations. The bastard.

This is the movie that initiated the BIG FIGHT with my brother. Our relationship has never been the same.

Well I am an exdemocrat too.

I haven't read it. It wouldn't suprise me that Moore owns plenty of stock in Halliburton and many other companies he explicity of implicitly villifies.

In the case of Moore, not that I pay the man much attention, I think we've got a pure charlatan. I think he believes what he puts out, or even cares, about the topics he picks. I think the guy has identified a formula and an audience and is milking it for money while he can.

in the previous comment. (And just read in whatever other corrections are necessary.)

if anyone comes across a link to the complaint, please post it.

I have seen Michael Moore Hates America and I urge everyone who despises the turgid turd to see it, too.

The problem with this case, it would seem, is that it presupposes the court take MM seriously, which is nigh hard to do. The court must surely find that MM is full of bs, in which case either he should owe a lot of people a lot of money, or the plaintiff is in error for taking him seriously when no serious person would. Everyone knew his flick was the crudest propaganda, didn't they?

Actually, the problem with this case is that the one thing Moore absolutely is is a businessman. I'm not surprised they pursued a settlement. For what it's worth, I wish them luck. They're gonna need it.

“Everyone knew his flick was the crudest propaganda, didn't they?”

No, the exact opposite is the case regarding Michael Moore’s supporters. They consider the film a balanced and objective piece of journalism. Moreover, a sizable number of leading Democratic Party politicians attended the Washington, DC premiere.

The film got him the seat of honor next to a former president at the 2004 Democratic National Convention. If THAT doesn't speak volumes, what in the world ever will?