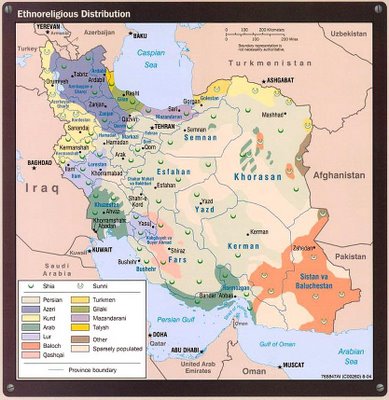 (Click image to enlarge)
I clipped this ethnic map of Iran out of a larger version so that folks could see where the reported unrest was taking place. At this point unrest is said to involve the Azeris, Kurds, Arabs, and Balochs. I don't know how serious it all is but the map puts locations with the names so you can see where things are happening.

Ok, I lied. I do have an opinion about how serious it all is, and that is that it won't go anywhere. Ahmadinejad has been pursuing the time tested method of consolidating power that Stalin, Hitler, Mao, and probably every other tyrant in history has pursued: purge the bureaucracy and party and replace all opposition members with your supporters. If the army/brownshirts/party/etc. are difficult, set up a separate command/SS/red guard/whatever and move money and support in their direction. When the time is ripe, jail and execute the opposition. Ahmadinejad hasn't yet reached the last step but he is on schedule to get there. The Iranian army could probably still put a stop to it but, like the German Army in 1938, I think they are going to miss their chance. The only remaining question in my mind is if Ahmadinejad plans on starting a war. I think the odds are that he does. I hope I'm wrong.

I note that Allahpundit at Hot Air, while pointing to this NY Times article on the power consolidation, mentions that Hitchins still thinks that Ahmadinejad is a puppet of the Mullahs. If so, I suspect this is just another case of the general rule that the Left never comprehends history, especially when it comes to charismatic figures and religion. As to the Times article, it contains little analysis but even so seems remarkably sanguine. I get the sense that they see Ahmadinejad as a progressive bringing social justice to the masses. That may just be an artifact of their selection of quotable people but it may also be another marker on the trail as the NY Times once again descends to cheerleading tyranny. I don't see that it would have been difficult to find folks who regard Ahmadinejad as a dangerous fanatic and give their opinions and analysis some space.
Posted by chuck at 3:20 PM

I heard that the Iranians were "warning" outsiders not to meddle in their ethnic problems. Had to laugh at that.

IT's like the NYT desperately wants him to be just another Hugo Chavez and fit the script of the hardliner who slaps around the old elites and begins to liberate the poor and women; but even they can't quite spin it because they can't erase all doubts that Ahmadinedjad is the most dangerous thing since unsliced bagels.

Yes, I think people can not believe that mad men really run things, unless those madmen happen to be Republican Presidents. I have often wondered if the fact that the students were able to thwart the US all those years ago actually is a part of their madness today, if it gave them a sense of destiny.

The Carter presidency, and the era in general, promoted stasis as a virtue. It is always best to do nothing. Nothing in Iran. Nothing in energy development beyond wearing a cardigan sweater. Nothing concrete to defuse Islamofascism. What can we do? Everything is hard - supremely hard - with too many complex choices. Besides, said Jimmy (as does Al Gore today) we're doomed, doooooooooomed I say.)

So we end up in a world paralyzed by process and the therapeutic need to talk. Talk ad nauseum. Need a freeway overpass? Let's talk about it for ten years. Want to dredge a shipping channel another two feet? How does twenty years of discussion sound? We want to decrease our dependence on foreign oil or build a fence on our southern border? Let's talk about those for oh, say, forty years.

The Alcan Highway, stretching 1,522 miles from Dawson Creek, British Columbia to Fairbanks, Alaska was begun March 8, 1942 and ended eight months and 12 days later. Wanna build some aircraft carriers? How about an Essex class launching every eight weeks, how does that sound?

At some point, whether forced by Iranian nukes or their blocking the Straits of Hormuz or terrorists walking in across the Sonoran Desert, the culture of stasis will be overturned. Wanna dig some coal mines and liquefy the stuff to run our cars - say in a year? Let's build a fence on the border. How does a year sound? Too long? How about six months?

It is almost immaterial which event triggers the change. The important thing will be making the change, and ushering in the required new cast of characters - the kinds of people like our fathers and grandfathers - who weren't stunned into inaction by complexity and religiously devoted to overanalysis. They just did it. There is a revolution there someplace.

I think you're right--we have information and communications and these are already slowing the slippage of of our old-timey national identity that began to show up a few decades ago. The future more and more belongs to the truth now, not to perceptions of it.

Chuck - Thanks for the links to the big map. I keep hoping that they will come in handy for tracking force dispositions.

Sooner, rather than later.

It is always best to do nothing.

That's exactly what the NY Times is advocating with their downplay of the danger. Their attempt to whitewash Ahmadinejad is just to tell us 'don't worry, everything's okay. Do NOT threaten or wish for violence of any kind!'

Of course they are reflexively opposed to any use of American power and that accounts for most of it. But I think there is something else. Doing anything so large and meaningful, at least as I've defined it here, also means upsetting the established order. It means that the creating and the doing would be accomplished by the soldiers, the civil engineers, the bulldozer drivers, the factory workers, and not by them. Or by anyone they know.

After it is over, there would be no diplomats you know left in Tehran to fly over to Geneva and meet you for lunch. A whole new crowd. And the new crowd probably wouldn't like you very much anyway. It would be even worse here at home. You are proud that you don't know a soul who could plan an oilfield in Alberta or Wyoming or even find these places on a map. Grandpa, tell me about how you guys built the biodiesel plant in just two months. If there is even the merest hint that such people might be the heroes of the future, no wonder the NY Times is filled with dread.

why worry about the truth of any of it? Just get the place invaded

In view of what is happening in the streets, there may be a lot of movement under the ice that we know nothing about.

There is a reason why terrorism is a rather uncommon tactic for use by a nation state with visible leadership, isn't there? Now, if we just had some sort of forces highly specialized in clandestine small group action which had shown a knack for improvisation and were experienced in toppling Muslim extremist governments using primarily indigenous personnel. Too much to hope for - load the B-1's and have done with it.

It's flaring up again--